What makes a rolling landscape roll? 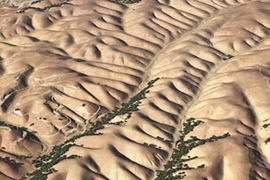 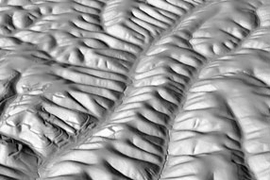 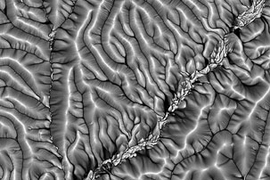 Caption:
Overhead view of Gabilan Mesa, California, showing the logarithm of drainage area, calculated by routing flow computationally over an elevation map from the National Center for Airborne Laser Mapping (NCALM). Light shades are ridgelines, darker shades are valleys. Scene is approximately 3.5 km wide.
Credits:
Image courtesy of Taylor Perron (MIT)
Anyone who has flown over the western United States knows the patterns well: Seemingly endless repetitions of similar landforms, ridges and valleys and ridges and valleys arranged with nearly the regularity of the teeth on a comb. Now, an MIT geologist and co-workers say they have found the underlying mechanism that explains these widespread patterns - and how they vary from one place to another.

The fundamental understanding of the processes that lead to these parallel grooves is not just useful theoretically, but could ultimately allow geologists to predict how eroding landscapes will respond to a changing climate. It should also make it easier to determine the mechanical properties of the underlying rock from aerial surveys, without having to dig or drill. The research could even help reveal the processes that have shaped landscapes on other planets, including whether they bear the signature of life.

Computer model developed by Taylor Perron and colleagues shows how evenly-spaced ridges and valleys form over time as a result of erosion and the slumping of soil.

"Most landscapes are made up of ridges and valleys," says Taylor Perron, an assistant professor of geology in the Department of Earth, Atmospheric and Planetary Sciences. "The most fundamental question we can ask is 'What controls their size?'" The basic mechanism that forms ridges and valleys, explains Perron, is a balance between two competing processes: gradual incision of valleys by flowing water, and the tendency of the land to slump into more rounded forms as soil slowly creeps downslope. The first tends to create sharp relief in the landscape, while the second process tends to smooth it out.

While the process of valley incision is governed mainly by the amount of rainfall and the strength of the soil and rock, the smoothing in many landscapes is largely driven by biological processes - especially the activity of burrowing animals. "Biotic agents like burrowing rodents slowly stir the soil," Perron says. "On average, they displace it downslope. This smoothes out sharp corners in the landscape."

To sort out the relative roles of the different processes and how they interact, the team used a combination of aerial reconnaissance, airborne laser altimetry, and research on the ground in selected sites to determine exactly what forces were at work on the landscape. The researchers used their observations to formulate a mathematical model for the long-term evolution of the topography.

The new findings, which include computer simulations that show how evenly spaced ridges and valleys emerge over many thousands of years, are described in a paper appearing in the journal Nature on July 23, written by Perron along with James Kirchner and William Dietrich of the University of California, Berkeley.

While the patterns of evenly spaced ridges and valleys have long been noticed in landscapes with sparse vegetation, it took new technology to reveal just how ubiquitous these patterns are, and to measure them precisely. Laser altimeters mounted in aircraft can create detailed, high-resolution topographic maps of landscapes that are forested, revealing the contours that are obscured by the tree canopy. This technology produces digital maps that are "10 times better than anything we had before," he says.

Perron and his team used laser altimetry to study sites throughout the United States with valley spacing ranging from 30 meters to 300 meters. They found that the spacing correlates with the amount of rainfall and the strength of the underlying rock, with wetter conditions or harder rock giving rise to wider valley spacing. Perron suspects that the rainfall effect is largely a consequence of life: where water is more abundant, the biologically driven smoothing effect of soil creep is stronger, and tree roots and burrowing animals encourage water to travel through the ground rather than eroding the surface. "The ridge-valley wavelength is one way that Earth's landscapes bear the imprint of life," he says.

Perron hopes that such research will ultimately reveal distinctive effects that make it possible to infer the presence or absence of life on another planet, such as Mars, simply by studying the details of its topography. Just as importantly, he says, this analysis provides "a way of measuring the influence of life here on Earth."

The work was funded by the National Science Foundation, the Institute for Geophysics and Planetary Physics, and NASA.