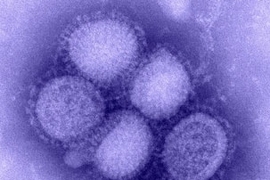 Caption:
An image of the H1N1 influenza virus taken in the CDC Influenza Laboratory.
Credits:
Courtesy / Centers for Disease Control

A team from MIT and the Centers for Disease Control has found a genetic explanation for why the new H1N1 "swine flu" virus has spread from person to person less effectively than other flu viruses.

The H1N1 strain, which circled the globe this spring, has a form of surface protein that binds inefficiently to receptors found in the human respiratory tract, the team reports in the July 2 online edition of Science.

"While the virus is able to bind human receptors, it clearly appears to be restricted," says Ram Sasisekharan, the Edward Hood Taplin Professor and director of the Harvard-MIT Division of Health Sciences and Technology (HST) and the lead MIT author of the paper. Sasisekharan and his laboratory co-workers have been actively investigating influenza viruses.

That restricted, or weak, binding, along with a genetic variation in an H1N1 polymerase enzyme, which MIT researchers first reported three weeks ago in Nature Biotechnology, explains why the virus has not spread as efficiently as seasonal flu, says Sasisekharan. However, flu viruses are known to mutate rapidly, so there is cause for concern if H1N1 undergoes mutations that improve its binding affinity.

"We need to pay careful attention to the evolution of this virus," says Sasisekharan.

On June 11, the World Health Organization declared a level 6 pandemic alert for H1N1. More than 300 people have died and more than 70,000 people have been infected, according to the WHO.

Sasisekharan and CDC senior microbiologist Terrence Tumpey have previously shown that a flu virus's ability to infect humans depends on whether its hemagglutinin protein can bind to a specific type of receptor on the surface of human respiratory cells.

In the new Science paper, Sasisekharan, Tumpey and colleagues compared the new H1N1 strain to several seasonal flu strains, including some milder H1N1 strains, and to the virus that caused the 1918 flu pandemic. They found that the new strain, as expected, is able to bind to the predominant receptors in the human respiratory tract, known as umbrella-shaped alpha 2-6 glycan receptors.

However, binding efficiency varies between flu strains, and that variation is partly determined by the receptor-binding site (RBS) within the hemagglutinin protein. The team found that the new H1N1 strain's RBS binds human receptors much less effectively than other flu viruses that infect humans.

The researchers also found that the new H1N1 strain spreads inefficiently in ferrets, which accurately mimics human influenza disease including how it spreads or transmits in humans. When the ferrets were in close contact with each other, they were exposed to enough virus particles that infection spread easily. However, when ferrets were kept separate and the virus could spread only through airborne respiratory droplets, the illness spread much less effectively.

This is consistent with the transmission of this virus seen in humans so far, says Sasisekharan. Most outbreaks have occurred in limited clusters, sometimes within a family or a school but not spread much further.

"One of the big payoffs of long-term investments in carbohydrate biology and chemistry research is an understanding of the relationships between cell surface carbohydrate structure and viral infectivity," said Jeremy M. Berg, director of the National Institute of General Medical Sciences of the National Institutes of Health, which partly funded the research. "Tools developed in building such understanding help in the response to events like the recent H1N1 outbreak."

Recent studies have shown that a viral RNA polymerase known as PB2 is critical for efficient influenza transmissibility. (RNA polymerase controls the viruses' replication once they infect a host.) The new H1N1 strain does not have the version of the PB2 gene necessary for efficient transmission.

MIT researchers led by Sasisekharan first reported the PB2 work in the June 9 online issue of Nature Biotechnology. That study also found that the new H1N1 strain has substantial genetic variability in the proteins targeted by current vaccines, making it likely that existing seasonal vaccines will be ineffective against the new strain.

Moreover, the researchers discovered that the new strain might just need a single change or mutation that could lead to inefficient interaction with the influenza drug oseltamivir, commonly known as Tamiflu, raising the possibility that strains resistant to Tamiflu could emerge easily.

The research done at MIT was funded by the Singapore-MIT Alliance for Research and Technology and the National Institutes of General Medical Sciences.