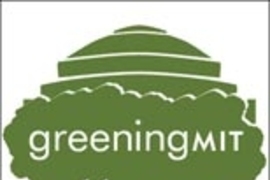 GreeningMIT is an occasional series focusing on the broad efforts to improve energy efficiency on campus.

Employees in a handful of MIT buildings might notice what look like slim, fin-tubed radiators in ceiling cavities. These cooling devices are a relatively recent innovation to make its way to the U.S. market. Called chilled beams, they use water, not air, to remove heat from a room.

If you peek under the cover of a baseboard heater, you'll see a pipe studded with many thin fins, looking like a car radiator. Chilled beams are based on a similar design, except instead of one long straight pipe, their pipes snake back and forth like the security line at the airport. And instead of heating air with hot water, they cool it with cold water.

The potential energy reduction of using chilled beams instead of a traditional air-conditioning system ranges from 20 percent to 50 percent, depending on the type of system, climate and building.

The recently completed expansion and renovation to the Main Group -- the 49,000-square-foot infill project of the Building 6 courtyard -- is one of the recipients of chilled beams. This energy-efficient air-conditioning system also has been successfully installed in buildings 4, 6 and 8.

Peter L. Cooper, manager of sustainability engineering and utility planning for the Department of Facilities, notes that chilled beams take one-tenth the volume of fresh air needed for traditional air conditioning --Â along with less ductwork, smaller ducts and smaller fans. When the entire Main Group expansion and renovation project is completed, energy savings tied to the smaller fans alone is expected to be around $400,000 annually.

The new MIT Sloan School of Management expansion and the David H. Koch Institute for Integrative Cancer Research also will take advantage of some chilled-beam cooling. According to Cooper, the beams are useful in offices, laboratories and other spaces where equipment and sunlight generate a significant amount of heat.

"One of its advantages over conventional air conditioning is that it can be retrofitted in buildings that can't accommodate conventional air-conditioning equipment," Cooper says of the chilled beams technology, which was deployed in buildings 4, 6 and 8 in part because those structures had neither enough ductwork nor enough space for new ductwork.

MIT will incorporate two types of chilled beams: active and passive. Active systems tie into the building's air supply ducts, mixing supply air with cooled air and distributing it through diffusers. Passive technology relies on warm air rising to the beams to be cooled. It then descends without the assistance of fans. In both cases, water cooled to between 59-65 degrees Fahrenheit is pumped from a chilled water system to the coiled piping inside the beam.

"There's a factor of eight improvement in cost of moving a Btu of air cooled by water versus air. If you can get the cooling energy into the space through water, you're way ahead," says Cooper. "The eight times factor is a very attractive alternative from an energy point of view."