A fabric with vision 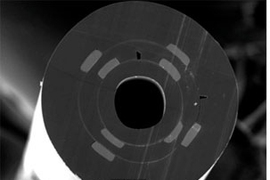 Imagine a soldier's uniform made of a special fabric that allows him to look in all directions and identify threats that are to his side or even behind him. In work that could turn such science fiction into reality, MIT researchers have developed light-detecting fibers that, when weaved into a web, act as a flexible camera. Fabric composed of these fibers could be joined to a computer that could provide information on a small display screen attached to a visor, providing the soldier greater awareness of his surroundings.

The researchers, led by Associate Professor Yoel Fink of the Department of Materials Science and Engineering (DMSE), emphasize that while such an application and others like it are still only dreams, work is rapidly progressing on developing fabrics capable of capturing images. In a recent issue of the journal Nanoletters, the team reported what it called a "significant" advance: using such a fiber web to take a rudimentary picture of a smiley face.

"This is the first time that anybody has demonstrated that a single plane of fibers, or 'fabric,' can collect images just like a camera but without a lens," said Fink, corresponding author of the Nanoletters paper. "This work constitutes a new approach to vision and imaging."

Our eyes are a great example of Nature's approach to imaging: they involve a highly sophisticated and localized organ made in part of a delicate lens. Technologists have mimicked this approach in cameras, telescopes and even microscopes.

But lenses of natural or man-made origin have a limited field of view, and are susceptible to damage, leading to the loss of the imaging or seeing capacity altogether. Optical fiber webs, in contrast, provide a distributed imaging capability provided by the entire surface of a fabric, which is in principle much more robust to damage and "blindness." If one area is damaged, other fibers can still function, extracting the image.

"We are saying, 'instead of a tiny, sensitive object [for capturing images], let's construct a large, distributed system,'" said Fink, who is also affiliated with MIT's Research Laboratory of Electronics (RLE), the Center for Materials Science and Engineering (CMSE) and Institute for Soldier Nanotechnologies (ISN).

"While the current version of these fabrics can only image nearby objects, it can still can see much farther than most shirts can," he added.

The new fibers, less than a millimeter in diameter, are composed of layers of light-detecting materials nested one within another.

Those layers include two rings of a semiconductor material that are light sensitive, each ring only 100 billionths of a meter across. Four metal electrodes contact each of the rings, extending along the length of the fiber, for a total of eight. Each semiconductor ring with its attached electrodes is in turn encased in rings of a polymer insulator that separate it from its neighbor.

The team starts with a macroscopic cylinder, or preform, of these elements. That preform is placed into a special furnace that melts the components, carefully drawing them into miniscule fibers that retain the original orientation of the various layers. The process can produce many meters of fiber.

Fink's team demonstrated the power of their approach by placing an object - a smiley face - between a light source and a small swatch of fabric composed of the fibers that was in turn connected to an external amplifying electrical circuit and computer.

In the current work, the smiley face was illuminated with light at two separate wavelengths. This generated a distinct pattern on the fabric mesh that was then fed into a computer. From there, an algorithm described earlier by the Fink team in Nature Materials assimilates the data to create a black-and-white image of the object on a computer screen.

First author Fabien Sorin, a postdoctoral associate in RLE, DMSE and ISN, said that as the individual fibers become more sophisticated, it is possible to envision fabrics with more intriguing and complex functionalities, such as ones capable of producing crisper images in color.

"It is exciting to merge nanotechnology, which is at the forefront of modern science, with textiles and fabrics, one of man's oldest technologies," Sorin said.

Sorin's and Fink's colleagues on the work are Ofer Shapira, also a postdoctoral associate in RLE and ISN; Ayman F. Abouraddy of the University of Central Florida; Matthew Spencer of MIT's Department of Electrical Engineering and Computer Science; Nicholas D. Orf of RLE, DMSE and ISN; and John D. Joannopoulos, director of the ISN and MIT's Francis Wright Davis Professor of Physics.

This work was supported by the Army Research Office through the ISN, the National Science Foundation through the Materials Research Science and Engineering Center Program, the Defense Advanced Research Projects Agency and the Department of Energy.

Different social and racial groups have varying views of the problem’s urgency.

The company’s software, based on work by co-founder and Professor Ed Crawley, expedites the process of home energy accreditation.