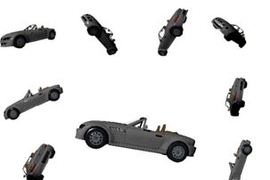 ↓ Download Image
Caption: The human brain easily recognizes that these cars are all the same object, but the variations in the car's size, orientation and position are a challenge for computer-vision algorithms.
Credits: Image / Nicolas Pinto

Caption:
The human brain easily recognizes that these cars are all the same object, but the variations in the car's size, orientation and position are a challenge for computer-vision algorithms.
Credits:
Image / Nicolas Pinto

For years, scientists have been trying to teach computers how to see like humans, and recent research has seemed to show computers making progress in recognizing visual objects.

A new MIT study, however, cautions that this apparent success may be misleading because the tests being used are inadvertently stacked in favor of computers.

However, James DiCarlo, a neuroscientist in the McGovern Institute for Brain Research at MIT, graduate student Nicolas Pinto and David Cox of the Rowland Institute at Harvard argue that these image sets have design flaws that enable computers to succeed where they would fail with more-authentically varied images. For example, photographers tend to center objects in a frame and to prefer certain views and contexts. The visual system, by contrast, encounters objects in a much broader range of conditions.

"The ease with which we recognize visual objects belies the computational difficulty of this feat," explains DiCarlo, senior author of the study in the Jan. 25 online edition of PLoS Computational Biology. "The core challenge is image variation. Any given object can cast innumerable images onto the retina depending on its position, distance, orientation, lighting and background."

The team exposed the flaws in current tests of computer object recognition by using a simple "toy" computer model inspired by the earliest steps in the brain's visual pathway. Artificial neurons with properties resembling those in the brain's primary visual cortex analyze each point in the image and capture low-level information about the position and orientation of line boundaries. The model lacks the more sophisticated analysis that happens in later stages of visual processing to extract information about higher-level features of the visual scene such as shapes, surfaces or spaces between objects.

The researchers intended this model as a straw man, expecting it to fail as a way to establish a baseline. When they tested it on the Caltech101 images, however, the model did surprisingly well, with performance similar or better than five state-of-the-art object-recognition systems.

How could that be? "We suspected that the supposedly natural images in current computer vision tests do not really engage the central problem of variability, and that our intuitions about what makes objects hard or easy to recognize are incorrect," Pinto explains.

To test this idea, the authors designed a more carefully controlled test. Using just two categories--planes and cars--they introduced variations in position, size and orientation that better reflect the range of variation in the real world.

"With only two types of objects to distinguish, this test should have been easier for the 'toy' computer model, but it proved harder," Cox says. The team's conclusion: "Our model did well on the Caltech101 image set not because it is a good model but because the 'natural' images fail to adequately capture real-world variability."

As a result, the researchers argue for revamping the current standards and images used by the computer-vision community to compare models and measure progress. Before computers can approach the performance of the human brain, they say, scientists must better understand why the task of object recognition is so difficult and the brain's abilities are so impressive.

One approach is to build models that more closely reflect the brain's own solution to the object recognition problem, as has been done by Tomaso Poggio, a close colleague of DiCarlo's at the McGovern Institute (Tech Talk Feb 28, 2007).

This study was supported by the National Eye Institute, the Pew Charitable Trust and the McKnight Endowment Fund for Neuroscience.