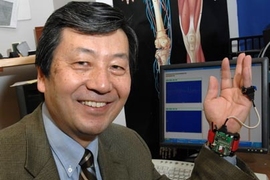 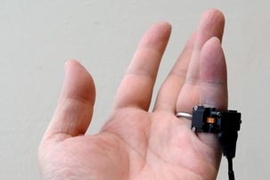 High blood pressure is a common risk factor for heart attacks, strokes and aneurysms, so diagnosing and monitoring it are critically important. However, getting reliable blood pressure readings is not always easy.

Visits to the doctor's office can provoke anxiety that distorts blood pressure readings, and even when accurate, such visits provide only one-time snapshots of the patient's condition. To overcome these obstacles, MIT engineers have built a wearable blood pressure sensor that can provide continuous, 24-hour monitoring.

Blood pressure can change from minute to minute, so continuous monitoring offers a much broader picture of cardiovascular health. The new monitor, which loops around the wrist and the index finger, is just as accurate as traditional cuff devices but much less cumbersome, allowing it to be worn for hours or days at a time.

"The human body is so complex, but the cuff gives only snapshot data," says Harry Asada, an MIT mechanical engineer who led the development of the new monitor. "If you get signals all of the time you can see the trends and capture the physical condition quite well."

Such devices could be used to keep tabs on hypertension as well as sleep apnea, which causes sufferers to stop breathing many times throughout the night. Eventually, doctors may be able to use data gathered from continuous monitoring to predict when a heart attack may occur, says Asada, the Ford Professor of Engineering and director of MIT's d'Arbeloff Laboratory for Information Systems and Technology.

CardioSign, a company launched by Asada's former student, is working on commercializing the device and hopes to start clinical trials soon. Asada said he believes a commercial version of the device could be available within five years, once it becomes easier to use, more reliable and cheaper to manufacture.

Traditional blood pressure monitoring requires a cuff, wrapped around the upper arm and inflated until blood flow is completely cut off. The examiner then gradually releases the pressure, listening to the flow until the pulse can be detected.

With the new monitor, no cuff is required. Instead, the device takes advantage of a method called pulse wave velocity, which allows blood pressure to be calculated by measuring the pulse at two points along an artery.

That posed a challenge because blood pressure in the hand varies depending on its position: If the arm is raised above the heart, the pressure will be higher than if it is below the heart. The researchers solved that dilemma by incorporating a sensor that measures acceleration in three dimensions, allowing the hand position to be calculated at any time.

This not only compensates for the error due to height changes, but also allows them to calibrate the sensor for more accurate calculation of blood pressure. As the wearer raises the hand up and down, the hydrostatic pressure changes at the sensor. Correlating the change of pulse wave velocity to the hydrostatic pressure change, the system can automatically calibrate its measurement.

Once the blood pressure information is gathered, the data can be transmitted via radio signals or wireless Internet. The device runs on a tiny battery, about the same size as the ones that power watches.

The wearable blood pressure sensor was born from a collaboration called the Home Automation and Healthcare Consortium, which launched in 1995 and included several MIT faculty members and about 20 companies.

The team's first project was a ring that measures pulse rate and the amount of oxygen present in the blood. After developing the ring, Asada decided to move on to blood pressure sensing, which offers even more valuable information about a patient's health.

The project was funded by the National Institutes of Health, National Science Foundation and the Sharp Corporation.