Drawing inspiration from nature to build a better radio 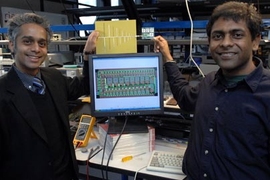 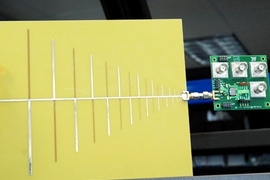 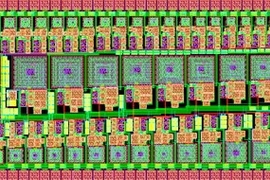 Caption:
Associate Professor of Electrical Engineering Rahul Sarpeshkar, left, and Soumyajit Mandal display their RF (radio frequency) cochlea, a low-power, ultra-broadband radio chip. The chip, held by Mandal, is attached to an antenna, held by Sarpeshkar. The diagram on the computer monitor shows the wiring layout of the chip.
Credits:
Photo / Donna Coveney

Caption:
A close-up of the RF cochlea and antenna.
Credits:
Photo / Donna Coveney

Rahul Sarpeshkar, associate professor of electrical engineering and computer science, and his graduate student, Soumyajit Mandal, designed the chip to mimic the inner ear, or cochlea. The chip is faster than any human-designed radio-frequency spectrum analyzer and also operates at much lower power.

"The cochlea quickly gets the big picture of what's going on in the sound spectrum," said Sarpeshkar. "The more I started to look at the ear, the more I realized it's like a super radio with 3,500 parallel channels."

Sarpeshkar and his students describe their new chip, which they have dubbed the "radio frequency (RF) cochlea," in a paper to be published in the June issue of the IEEE Journal of Solid-State Circuits. They have also filed for a patent to incorporate the RF cochlea in a universal or software radio architecture that is designed to efficiently process a broad spectrum of signals including cellular phone, wireless Internet, FM, and other signals.

The RF cochlea mimics the structure and function of the biological cochlea, which uses fluid mechanics, piezoelectrics and neural signal processing to convert sound waves into electrical signals that are sent to the brain.

As sound waves enter the cochlea, they create mechanical waves in the cochlear membrane and the fluid of the inner ear, activating hair cells (cells that cause electrical signals to be sent to the brain). The cochlea can perceive a 100-fold range of frequencies -- in humans, from 100 to 10,000 Hz. Sarpeshkar used the same design principles in the RF cochlea to create a device that can perceive signals at million-fold higher frequencies, which includes radio signals for most commercial wireless applications.

The device demonstrates what can happen when researchers take inspiration from fields outside their own, says Sarpeshkar.

Above: Rahul Sarpeshkar discusses research and education in his group and the intellectual challenge facing engineers at the frontiers of bioelectronics

"Somebody who works in radio would never think of this, and somebody who works in hearing would never think of it, but when you put the two together, each one provides insight into the other," he says. For example, in addition to its use for radio applications, the work provides an analysis of why cochlear spectrum analysis is faster than any known spectrum-analysis algorithm. Thus, it sheds light on the mechanism of hearing as well.

The RF cochlea, embedded on a silicon chip measuring 1.5 mm by 3 mm, works as an analog spectrum analyzer, detecting the composition of any electromagnetic waves within its perception range. Electromagnetic waves travel through electronic inductors and capacitors (analogous to the biological cochlea's fluid and membrane). Electronic transistors play the role of the cochlea's hair cells.

The analog RF cochlea chip is faster than any other RF spectrum analyzer and consumes about 100 times less power than what would be required for direct digitization of the entire bandwidth. That makes it desirable as a component of a universal or "cognitive" radio, which could receive a broad range of frequencies and select which ones to attend to.

This is not the first time Sarpeshkar has drawn on biology for inspiration in designing electronic devices. Trained as an engineer but also a student of biology, he has found many similar patterns in the natural and man-made worlds (http://www.rle.mit.edu/avbs). For example, Sarpeshkar's group, in MIT's Research Laboratory of Electronics, has also developed an analog speech-synthesis chip inspired by the human vocal tract and a novel analysis-by-synthesis technique based on the vocal tract. The chip's potential for robust speech recognition in noise and its potential for voice identification have several applications in portable devices and security applications.

The researchers have built circuits that can analyze heart rhythms for wireless heart monitoring, and are also working on projects inspired by signal processing in cells. In the past, his group has worked on hybrid analog-digital signal processors inspired by neurons in the brain.

Sarpeshkar says that engineers can learn a great deal from studying biological systems that have evolved over hundreds of millions of years to perform sensory and motor tasks very efficiently in noisy environments while using very little power.

"Humans have a long way to go before their architectures will successfully compete with those in nature, especially in situations where ultra-energy-efficient or ultra-low-power operation are paramount," he said. Nevertheless, "We can mine the intellectual resources of nature to create devices useful to humans, just as we have mined her physical resources in the past.

A version of this article appeared in MIT Tech Talk on April 15, 2009 (download PDF).

Task Force 2021 and Beyond moves into new phase

Effort to recast MIT for the post-Covid era will now shift to focus on refining and implementing ideas proposed earlier.