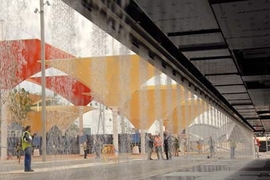 Caption:
The MIT-designed Digital Water Pavilion, featuring water walls that can be programmed to display patterns and images, was unveiled June 12 at the opening of the Zaragoza World Expo in Spain. <a onclick="MM_openBrWindow('zaragoza-enlarged.html','','width=509, height=583')">
<span onmouseover="this.className='cursorChange';">
<strong>Open image gallery</strong>
</span>
</a>
<noscript> <a href="zaragoza-enlarged.html">
<em>(no JavaScript)</em>
</a>
</noscript>
Credits:
Photo / Carlos Muntadas

An MIT-designed building with walls made entirely of water is being unveiled Thursday at the opening of the Zaragoza World Expo in Spain.

The Digital Water Pavilion, selected as Time magazine's "Best invention of the Year" in the field of architecture when its plans were unveiled in 2007, is the first of its kind and illustrates the potential of digital architecture to create spaces that dynamically adjust to people and conditions.

An interactive structure that can be programmed to take on varying shapes and to display patterns and images, the building is located at the entrance to the Expo and will contain an exhibition area, an information point and various public spaces.

"The design for the water pavilion grew out of a central challenge: How to make fluid, reconfigurable architecture?" said Carlo Ratti, head of MIT's SENSEable City Laboratory. "Our building aims to stand as a possible answer to this endeavor."

"Water has long been recognized as one of the most dynamic and engaging elements of urban public space," commented William J. Mitchell, head of MIT's Design Laboratory and former dean of architecture at MIT.Â "For centuries, architects have shaped and directed it by means of channels and pipes, nozzles, valves, and pumps."

The "water walls" that make up the structure are generated by high-speed computer controlled solenoid valves. They can be programmed to take varying shapes, to display patterns, images and text, and to respond dynamically to input from sensors.Â

"This capability enables architects to challenge many traditional ideas about architectural form," says Mitchell.Â  "Doors, for example, need not have fixed locations. When you walk up to them, water walls can open like the Red Sea for Moses, and then seamlessly close behind you."

Ratti likens the concept of digital water to a large scale inkjet printer: "The opening and closing of valves, at high frequency, produces a curtain of falling water -- a pattern of pixels created from air and water instead of illuminated points on a screen. The entire surface becomes a one-bit deep digital display that continuously scrolls downward."

All of the walls of the pavilion are made of digital water, along with vertical partitions on the edge of the roof and inside it. The only solid element of the pavilion is the roof -- a high-tech, 400 mm thick moveable structure covered by water, engineered by Arup and built by Siemens. The roof rests on moveable pistons and moves up and down depending on wind conditions. It can also be flattened into the ground, at which point the building disappears altogether.

The building contains 3,000 digitally controlled solenoid valves, several dozen pumps, 12 hydraulic stainless steel piston and a digital control system based on open source software. The water used is fully recycled; some of it is lost because of evaporation, but it is supplemented by rainfall at the pavilion's site.

The Digital Water Pavilion is the latest in a long line of new and innovative architecture to be unveiled at world expos, from the London Crystal Palace (1851) to the Eiffel Tower (1889) to the Mies van der Rohe-designed Barcelona Pavilion (1929).Â The theme of the Zaragoza Expo is water and sustainable development, and the fair is part of the city's broader effort to reinvent itself as a 21st century hub of knowledge, innovation and creativity.

"The Digital Water Pavilion illustrates how buildings of the future may change their appearance and form from moment to moment, based on necessity and use," says Ratti. "It is not easy to achieve such effects when dealing with concrete, bricks and mortar. But this becomes possible with digital water, which can appear and disappear."

"In the nineties, digital technology led us to fantasize about distant virtual worlds. Today we have moved on: The future of architecture might deal with digitally augmented environments, where bits and atoms seamlessly merge."

The design and execution of the Digital Water Wall project was a multidisciplinary collaboration between MIT, industry, and the city of Zaragoza. The concept of the digital water wall was initially developed and prototyped in the Smart Cities group at the MIT Media Lab, headed up by Mitchell. Its application in Zaragoza was explored in an MIT design studio under the direction of Dennis Frenchman, Mitchell and Ratti. The building itself was designed by Ratti's firm carlorattiassociati - walter nicolino & carlo ratti (Turin, Italy), the engineering company Arup (London, UK and Madrid, Spain), and landscape architects Agence Ter (Paris, France).