Call of the wild 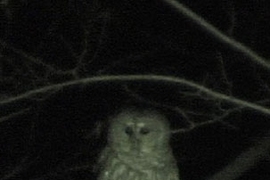 ↓ Download Image
Caption: An MIT project aimed at monitoring owls in their natural environment is growing into an international collaboration on how to use widespread networks of citizen-scientists to gain new insights into a wide variety of species.
Credits: Photo / Paula Aguilera 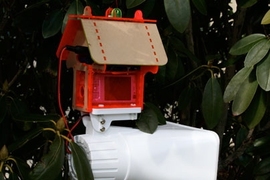 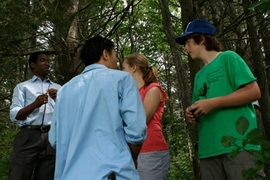 Caption:
An MIT project aimed at monitoring owls in their natural environment is growing into an international collaboration on how to use widespread networks of citizen-scientists to gain new insights into a wide variety of species.
Credits:
Photo / Paula Aguilera

What started out as a project aimed at monitoring owls in their natural environment has grown into an international collaboration on how to use widespread networks of citizen-scientists to gain new insights into a wide variety of species. It's an attempt to learn about the natural world by listening to its own voices, says MIT Media Lab visiting professor Dale Joachim.

Joachim started out by trying a series of tests to see if networks of advanced cell phones, equipped with GPS and compasses to monitor their position and orientation and connected to special arrays of directional microphones, could replace human volunteers in assessing owl populations.

Experiments in Connecticut and Maine showed that the system did work -- the owls responded to playback of recorded owl sounds through the cell phones, and their responses could be detected through the phones almost as accurately as when people on the ground listened for their calls and wrote down the results.

And listening to the owls, he found, is not only a good way to learn about owls, but also could be a good way of monitoring changes in the whole environment. The best results, he suggests, may come from finding new ways to make use of both widespread technology and networks of people.

Joachim says his initial focus was on instrumentation for field research that "replaced people with machines so as to listen continuously and understand as much as possible. But it turns out that a lot of citizen scientists, including myself, would rather be outdoors. So the focus turned to how to better tell the story of nature through people."

There are things that people can do much better in person, he found, such as localizing the direction of sounds by turning their heads. Watching a person turn while listening to the natural sounds often provides better localization than just using the microphone array. So part of his research has evolved into simultaneously monitoring information from the devices and the people's behavior in the field. "What can we tell about the environment from both the instruments and the people?" he asks.

As a result, he is now working on several projects in partnership with people in other locations, starting in Connecticut and Maine and now including Malaysia, and eventually Mexico and Russia. "The push now is toward facilitating international, long-distance collaboration for observing nature," he says.

Using the Internet to let people of varied backgrounds around the world constantly monitor a combination of audio information from cellphones and visual information from remote-controllable webcams could lead to a better understanding of the environment, he says.

Preliminary experiments by colleagues using this technique have already revealed species in places where they were not expected, Joachim says. This month, he is working with collaborators in Malaysia to begin setting up such a long-distance cooperative research project, he says.

He hopes that these new experiments will provide a way to quantify the impact of these remote-observing technologies on human understanding of the environment.

"I'm really exploring democratic venues through which large numbers of people can listen in," he says, "in a way that helps us obtain a broader understanding and appreciation of nature."