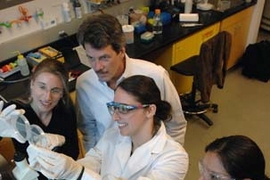 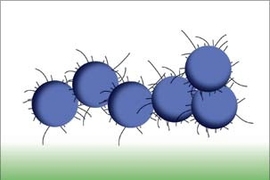 Caption:
MIT researchers survey the evidence of their success in figuring out how to make surface coatings that bacteria won't stick to. From left, assistant professor of material science and engineering Krystyn Van Vliet, director of the MIT Center for Materials Science and Engineering Michael Rubner; and materials science and engineering graduate student Jenny Lichter and senior Maricela Delgadillo.
Credits:
Photo / Donna Coveney

Caption:
Bottom, bacteria stick to the stiffer surface. Top, researchers at MIT have manipulated the mechanical stiffness of polymer films, creating a surface that bacteria are less prone to stick to.
Credits:
Image / Patrick Gillooly, MIT

Having found that whether bacteria stick to surfaces depends partly on how stiff those surfaces are, MIT engineers have created ultrathin films made of polymers that could be applied to medical devices and other surfaces to control microbe accumulation.

The inexpensive, easy-to-produce films could provide a valuable layer of protection for the health care industry by helping to reduce the spread of hospital-acquired infections, which take the lives of 100,000 people and cost the United States an estimated $4.5 billion annually.

The researchers, who described their work in a paper in an upcoming issue of Biomacromolecules, found they could control the extent of bacterial adhesion to surfaces by manipulating the mechanical stiffness of polymer films called polyelectrolyte multilayers. Thus, the films could be designed to prevent accumulation of hazardous bacteria or promote growth of desirable bacteria.

Van Vliet and her colleagues found the same trend in experiments with three strains of bacteria: Staphylococcus epidermidis, commonly found on skin, and two types of Escherichia coli.

Stiffness has usually been overlooked in studies of how bacteria adhere to surfaces in favor of other traits such as surface charge, roughness, and attraction to or repulsion from water. The new work shows that stiffness should also be taken into account, said Van Vliet.

The new films could be combined with current methods of repelling bacteria to boost their effectiveness, said Michael Rubner, an author of the paper and director of MIT's Center for Materials Science and Engineering.

Those methods include coating surfaces with antimicrobial chemicals or embedding metal nanoparticles into the surface, which disrupt the bacterial cell walls.

"For those bacteria that readily form biofilms, we have no delusions that we can prevent bacterial films from starting to form. However, if we can limit how much growth occurs, these existing methods can become much more effective," Rubner said.

Jenny Lichter, graduate student in materials science and engineering, and Todd Thompson, a graduate student in the Division of Health Sciences and Technology, are joint lead authors of the paper. They note that the films could also be used on medical devices that go inside the body, such as stents and other cardiac implants.

"Once a foreign object enters into the body, if you can limit the number of bacteria going in with it, this may increase the chances that the immune system can defend against that infection," said Thompson.

Another possible application for the films is to promote growth of so-called "good bugs" by tuning the mechanical stiffness of the material on which these bacteria are cultured. These films could stimulate growth of bacteria needed for scientific study, medical testing, or industrial uses such as making ethanol.

The researchers built their films, which are about 50 nanometers (billionths of a meter) thick, with layers of polyelectrolytes (a class of charged polymer). Alternating layers are added at different pH (acidity) levels, which determines how stiff the material is when hydrated at near-neutral pH, such as water. Polymer films assembled at higher pH (up to 6) are stiffer because the polymer chains crosslink readily and the polymers do not swell too much; those added at lower, more acidic pH (down to 2.5) are more compliant.

Van Vliet says the team's results could be explained by the relationship between surfaces and tiny projections from the bacterial cell walls, known as pili. Stiffer surfaces may reinforce stronger, more stable bonds with the bacterial pili. The researchers are now working on figuring out this mechanism.

The research was funded by the National Science Foundation, National Institutes of Health and the Arnold and Mabel Beckman Foundation Young Investigator Program.

Maricela Delgadillo, a senior in materials science and engineering, and Takehiro Nishikawa, a former postdoctoral researcher at MIT, now at the Advanced Medical Engineering Center in Osaka, Japan, are also authors of the paper.