Superfund may not be so super 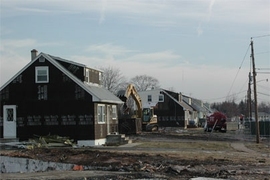 Superfund-sponsored clean-ups of hazardous waste sites should improve the housing market in nearby neighborhoods, right? Not so says Michael Greenstone, the 3M Professor of Environmental Economics at MIT.

In a paper to be published in the August issue of the Quarterly Journal of Economics, Greenstone and a colleague compared housing markets surrounding hazardous waste sites chosen for Superfund clean-ups to those surrounding sites that narrowly missed qualifying for Superfund remediation. Greenstone's hypothesis was that people living nearby value the clean-ups. He tested whether neighborhoods adjacent to Superfund sites became more desirable after clean-ups.

Superfund, a federal government program that cleans up the largest and most dangerous hazardous waste sites in the US, was signed into law in 1980. Almost 1600 sites have been identified and made eligible for federally led cleanups. Clean-up activities have been concluded at approximately two-thirds of these sites. The average cost of a completed cleanup is estimated at more than $55 million. The expected cost to clean-up the remaining sites is an additional $30 billion.

Greenstone finds that the clean-ups failed to cause increases in house prices or rental rates. Indeed, the changes in prices and rental rates are equal to the changes in the neighborhoods surrounding the hazardous waste sites where clean-ups did not take place. In addition, the populations of the neighborhoods and rate of new home construction remained at their pre clean-up levels.

The paper also finds that the average clean-up takes 12-13 years to complete and costs around $55 million. "The lengthy interventions are disruptive and very expensive," said Greenstone. "The housing market's clear message is that the clean-ups are not worth it to the people living near these sites."

Greenstone is now investigating whether there are health benefits from these clean-ups.

"We are facing a wide range of environmental problems, including the severe threats to our well being posed by climate change and water and air pollution," Greenstone said. "The findings suggest that less ambitious clean-ups like the erection of fences, posting of warning signs around the sites, and simple containment of toxics would free up resources to address environmental problems that have a higher payoff."

This work was funded in part by the Center for Energy and Environmental Policy Research at MIT. Greenstone's co-author, Justin Gallagher, is a graduate student at UC Berkeley.