Getting wrapped up in solar textiles 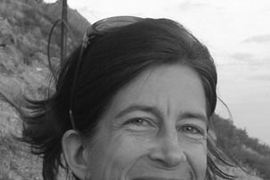 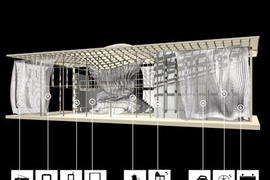 Sheila Kennedy, an expert in the integration of solar cell technology in architecture who is now at MIT, creates designs for flexible photovoltaic materials that may change the way buildings receive and distribute energy.

These new materials, known as solar textiles, work like the now-familiar photovoltaic cells in solar panels. Made of semiconductor materials, they absorb sunlight and convert it into electricity.

Kennedy uses 3-D modeling software to design with solar textiles, generating membrane-like surfaces that can become energy-efficient cladding for roofs or walls. Solar textiles may also be draped like curtains.

"Surfaces that define space can also be producers of energy," says Kennedy, a visiting lecturer in architecture. "The boundaries between traditional walls and utilities are shifting."

Principal architect in the Boston firm, Kennedy & Violich Architecture, Ltd., and design director of its materials research group, KVA Matx, Kennedy came to MIT this year. She was inspired, she says, by President Susan Hockfield's plan to make MIT the "energy university" and by MIT's interdisciplinary energy curriculum that integrates research and practice.

For Mary Hale, graduate student in architecture, Kennedy's Soft Space course was an inspiration to pursue photovoltaic technology in her master's thesis.

"I have always been interested in photovoltaics, but before this studio, I am not sure that I would have felt empowered to integrate them into a personal, self-propelled, project," she says.

Kennedy, for her part, will pursue her research in pushing the envelope of energy-efficiency and architecture. A recent project, "Soft House," exhibited at the Vitra Design Museum in Essen, Germany, illustrates what Kennedy means when she says the boundaries between walls and utilities are changing.

For Soft House, Kennedy transformed household curtains into mobile, flexible energy-harvesting surfaces with integrated solid-state lighting. Soft House curtains move to follow the sun and can generate up to 16,000 watt-hours of electricity--more than half the daily power needs of an average American household.

But that lower efficiency needn't be an insurmountable roadblock to the marketplace, Kennedy says, because Soft House provides an actual application of the unique material advantages of solar nano-technologies without having to compete with the centralized grid.

Which brings her back to the hands-on, prototype-building approach Kennedy hopes to draw from in her teaching and work at MIT.

"Working prototypes are a very important demonstration tool for showing people that there are whole new ways to think about energy," she says.