Could be a long wait before next big temblor--or maybe not
David Chandler, MIT News Office
Publication Date:
Press Inquiries 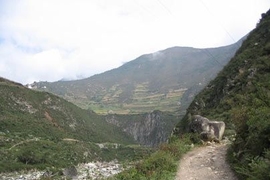 ↓ Download Image
Caption: The mountains near the Min River south of Wenchuan City, close to the epicenter of the recent earthquake in China that has killed more than 65,000 people to date.
Credits: Photo / Kristen Cook, MIT

Caption:
The mountains near the Min River south of Wenchuan City, close to the epicenter of the recent earthquake in China that has killed more than 65,000 people to date.
Credits:
Photo / Kristen Cook, MIT

A new analysis of the setting for last month's devastating earthquake in China by a team of geoscientists at MIT shows that the quake resulted from faults with little seismic activity, and that similar events in that area occur only once in every 2,000 to 10,000 years, on average.

However, the researchers caution that because earthquakes can sometimes occur in clusters, people should still be wary of another possible large-scale earthquake.

The magnitude 7.9 quake struck Sichuan province on May 12 at around noontime, which may have increased the human death toll because many people were at school, and the school buildings turned out to be especially vulnerable to collapse because of poor construction. More than 69,000 people have been confirmed dead so far, and more than 374,000 injured, with fears of further casualties because several lakes created by rockfall dams may give way and cause sudden flooding.

Clark Burchfiel, Schlumberger Professor of Geology, and Leigh Royden, professor of geology and geophysics in the Department of Earth, Atmospheric and Planetary Sciences at MIT, have been doing extensive research in that region of China and the Tibetan plateau for more than two decades, but had found no hints that suggested such a large earthquake might strike the area. They and several colleagues, including MIT's Robert D. van der Hilst and Bradford H. Hager, who are both Cecil and Ida Green Professors of Earth Sciences, have published a paper analyzing the causes of the quake that appears in the July issue of GSA Today, a publication of the Geological Society of America.

The team operated an array of 25 broadband seismograph stations in this region of western Sichuan for more than a year. "Nobody was thinking there would be a major seismological event" in that area, Royden says. "This earthquake was quite unusual," and may have involved a simultaneous rupture of two separate but contiguous faults, she continued.

The region is extremely unusual geologically, Royden says, because of the very steep slopes at the boundary between the Sichuan Basin to the east and the Tibetan plateau to the west. The elevation rises sharply by about 3,500 meters (more than two miles) over a span of only about 50 kilometers (about 30 miles).

The area where the quake occurred is part of the boundary between two of the Earth's tectonic plates, where the Indian and Asian plates converge in an ongoing collision that has created the Himalayan mountains and the Tibetan plateau. But in central and eastern Tibet, unlike most other areas of continental collision, much of the movement of crust is hidden from view. Instead of thickening the entire crust by folding and faulting, the surface of the eastern Tibetan plateau is undeformed and is being lifted upward by thickening of a weak crustal layer more than 15 km below the surface.

The crust in this deep weak layer is flowing eastward away from central Tibet to escape from the area directly north of the Indian plate. But, in the area where the earthquake occurred, this rapidly flowing material is obstructed by a major obstacle, the Sichuan Basin. "The crust and mantle beneath the basin appears to form a hard, cold knot" that extends to 250 km depth, Royden says, that forces the flow to "wrap around the knot." The huge elevation difference between the surface of the plateau and the Sichuan Basin provides the underlying stress that led to the quake, she says.

As the surface of the eastern plateau has risen, it has become increasingly incised by rivers. Four of the world's 10 largest rivers, including the Yangtze, flow through the region, Royden says. "There are gorges two and a half to three kilometers deep, and hundreds of kilometers long--they dwarf the Grand Canyon," she says.

The steep slopes within the river gorges make the region especially vulnerable when earthquakes occur, she says. "When you shake those valleys, everything just slides down into the river gorges and eventually washes out to sea," she says.

Because of the extreme geological environment of this region, Royden says, it may be possible to learn about mechanisms taking place there that may also occur, at a smaller scale, in other places. In this way, it may reveal processes that are also relevant in other parts of the world but that would be much harder to discover in these other locations because they would be more subtly expressed.

The research was funded by the National Science Foundation. The MIT scientists are currently collaborating with geophysicists of the China Seismological Bureau (in Beijing and Chengdu, Sichuan) on a study of the structure and seismic hazard of the region.