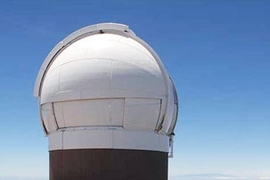 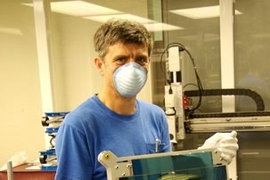 ↓ Download Image
Caption: John Tonry of the Institute for Astronomy holds an entire array of 60 chips; an array of 60 OTAs will be installed in the focal plane of each of the four cameras in the Pan-STARRS facility.
Credits: Photo / MIT Lincoln Laboratory

Caption:
John Tonry of the Institute for Astronomy holds an entire array of 60 chips; an array of 60 OTAs will be installed in the focal plane of each of the four cameras in the Pan-STARRS facility.
Credits:
Photo / MIT Lincoln Laboratory

Silicon chips developed at MIT Lincoln Laboratory are at the heart of a new survey telescope that will soon provide a more than fivefold improvement in scientists' ability to detect asteroids and comets that could someday pose a threat to the planet.

The prototype telescope installed on Haleakala mountain, Maui, will begin operation this December. It will feature the world's largest and most advanced digital camera, using the Lincoln Laboratory silicon chips. This telescope is the first of four that will be housed together in one dome. The system, called Pan-STARRS (for Panoramic Survey Telescope and Rapid Response System), is being developed at the University of Hawaii's Institute for Astronomy.

"This is a truly giant instrument," said University of Hawaii astronomer John Tonry, who led the team developing the new 1.4-gigapixel camera. "We get an image that is 38,000 by 38,000 pixels in size, or about 200 times larger than you get in a high-end consumer digital camera."

Pan-STARRS, whose cameras cover an area of sky six times the width of the full moon and can detect stars 10 million times fainter than those visible to the naked eye, is also unique in its ability to find moving or variable objects.

Lincoln Laboratory's charge-coupled device (CCD) technology is a key enabling technology for the telescope's camera. In the mid-1990s, Lincoln Laboratory researchers Barry Burke and Dick Savoye of the Advanced Imaging Technology Group, in collaboration with Tonry, who was then working at MIT, developed the orthogonal-transfer charge-coupled device (OTCCD), a CCD that can shift its pixels to cancel the effects of random image motion. Many consumer digital cameras use a moving lens or chip mount to provide camera-motion compensation and thus reduce blur, but the OTCCD does this electronically at the pixel level and at much higher speeds.

The challenge presented by the Pan-STARRS camera is its exceptionally wide field of view. For wide fields of view, jitter in the stars begins to vary across the image, and an OTCCD with its single shift pattern for all the pixels begins to lose its effectiveness. The solution for Pan-STARRS, proposed by Tonry and developed in collaboration with Lincoln Laboratory, was to make an array of 60 small, separate OTCCDs on a single silicon chip. This architecture enabled independent shifts optimized for tracking the varied image motion across a wide scene.

"Not only was Lincoln the only place where the OTCCD had been demonstrated, but the added features that Pan-STARRS needed made the design much more complicated," said Burke, who has been working on the Pan-STARRS project. "It is fair to say that Lincoln was, and is, uniquely equipped in chip design, wafer processing, packaging, and testing to deliver such technology."

The primary mission of Pan-STARRS is to detect Earth-approaching asteroids and comets that could be dangerous to the planet. When the system becomes fully operational, the entire sky visible from Hawaii (about three-quarters of the total sky) will be photographed at least once a week, and all images will be entered into powerful computers at the Maui High Performance Computer Center. Scientists at the center will analyze the images for changes that could reveal a previously unknown asteroid. They will also combine data from several images to calculate the orbits of asteroids, looking for indications that an asteroid may be on a collision course with Earth.

Pan-STARRS will also be used to catalog 99 percent of stars in the northern hemisphere that have ever been observed by visible light, including stars from nearby galaxies. In addition, the Pan-STARRS survey of the whole sky will present astronomers with the opportunity to discover, and monitor, planets around other stars, as well as rare explosive objects in other galaxies.

Detailed information about the Pan-STARRS design and its science applications can be found at http://pan-starrs.ifa.hawaii.edu/public/. The project was funded by the U.S. Air Force Research Laboratory.