The city that never sleeps ... nor stops talking 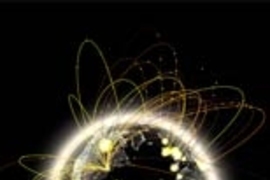 ↓ Download Image
Caption: NYTE's Globe Encounters visualizes in real time the volumes
of Internet data flowing between New York and cities around the world. The
size of the glow on a particular city location corresponds to the amount of
IP traffic flowing between that place and New York City. <a href="http://senseable2.mit.edu/nyte/images/hres/01%20nyte%20-%20globe%20encounters.tif"><strong>Full-size image</strong></a>
Credits: Image / senseable city lab 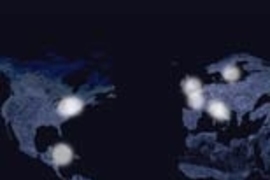 ↓ Download Image
Caption: NYTE's Pulse of the Planet illustrates the volume of international
calls between New York City and 255 countries over the twenty-four hours in
a day. <a href="http://senseable2.mit.edu/nyte/images/hres/02%20nyte%20-%20pulse%20of%20the%20planet.tif"><strong>Full-size image</strong></a>
Credits: Image / senseable city lab 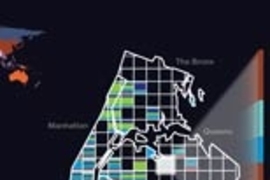 ↓ Download Image
Caption: NYTE's World Within New York shows how different neighborhoods
reach out to the rest of the world via the AT&amp;T telephone network. <a href="http://senseable2.mit.edu/nyte/images/hres/03%20nyte%20-%20world%20within%20new%20york.tif"><strong>Full-size
image</strong></a>
Credits: Image / senseable city lab

Caption:
NYTE's Globe Encounters visualizes in real time the volumes
of Internet data flowing between New York and cities around the world. The
size of the glow on a particular city location corresponds to the amount of
IP traffic flowing between that place and New York City. <a href="http://senseable2.mit.edu/nyte/images/hres/01%20nyte%20-%20globe%20encounters.tif"><strong>Full-size image</strong></a>
Credits:
Image / senseable city lab

Caption:
NYTE's Pulse of the Planet illustrates the volume of international
calls between New York City and 255 countries over the twenty-four hours in
a day. <a href="http://senseable2.mit.edu/nyte/images/hres/02%20nyte%20-%20pulse%20of%20the%20planet.tif"><strong>Full-size image</strong></a>
Credits:
Image / senseable city lab

Caption:
NYTE's World Within New York shows how different neighborhoods
reach out to the rest of the world via the AT&amp;T telephone network. <a href="http://senseable2.mit.edu/nyte/images/hres/03%20nyte%20-%20world%20within%20new%20york.tif"><strong>Full-size
image</strong></a>
Credits:
Image / senseable city lab

What does the telecommunications traffic flowing in and out of New York City reveal about the city that never sleeps?

To find out, researchers from the senseable city laboratory at the Massachusetts Institute of Technology have created a novel project that reveals the complex dynamics of talk that exist between New York and other cities around the globe. The project, called New York Talk Exchange (NYTE), is based around an analysis of telecommunications traffic flowing to and from New York City and will debut Feb. 24, 2008, as part of The Museum of Modern Art (MoMA) exhibition, "Design and the Elastic Mind."

"It is like showing how the heart of New York pulsates in real time and how it connects with the global network of cities," said Carlo Ratti, director of the senseable city laboratory and associate professor of the practice of urban technologies at MIT.

"We are interested in visualizing and exploring the connections that New York entertains with the rest of the world, how they change over the course of a day, and how the city's neighborhoods differ from each other by maintaining special and distinct relationships with particular cities and countries," said Kristian Kloeckl, project leader at the senseable city laboratory.

NYTE uses data flows from the AT&T network that measure the volume of Internet protocol (IP) and voice traffic flowing in and out of New York at a given time. These data are then projected as three large visualizations that will hang at MoMA, and will also be accessible over the web at http://senseable.mit.edu/nyte.

The first visualization, called Globe Encounters, uses 3-D real-time animations to show New York's global connections to other world cities-a kind of "globalization in real time." The second, called Pulse of the Planet, shows how those connections change over the course of the day as time zones sweep across the planet. It also shows how New York follows a 24-hour schedule, as if it were always awake to connect to the rest of the globe. The third zooms inside New York City's five boroughs and explores how global connections vary from neighborhood to neighborhood-a kind of "globalization from the bottom."

The project illustrates how different parts of the city are linked to very different portions of the planet. For example, Mumbai, India, ranks 24th as the origin of calls into Manhattan, and 11th in calls into Queens. Toronto, Canada, is one of the main destinations for calls out of Manhattan, but accounts for only 1 percent of calls from the Bronx.

As Columbia University Professor Saskia Sassen, author of the book "Global Cities," details in the NYTE project catalog, "The striking piece of evidence coming out of this project is that global talk happens both at the top of the economy and at its lower end. The vast middle layers of our society are far less global; the middle talks mostly nationally and locally."

The project also makes it possible to draw comparisons between global cities. For example, there has been much discourse in the popular media about the rivalry between New York and London for world city pre-eminence, with the majority concluding that London is the more cosmopolitan city.

However, data shared with MIT by British Telecom reveal a different picture, with New York having a more global reach into Asian and South American hubs such as Beijing, BogotÃ¡ and Riyadh, and London having more of a reach into Europe and the United States.

"The AT&T and BT data comparison hints at an interesting parallel: in an age of globalization, perhaps London's relationship to Europe is analogous to what is conventionally believed to be New York's relationship to the whole of the United States," said Ratti. "The 'continent' may be closer to London than the British believe."

Kloeckl stressed that individual privacy is assured during the project. "The telecommunications traffic is measured at a high level in the global network flow. No information about individuals is collected at any point in the process."

Over the next few months the MIT team hopes to address some important research questions that loom behind the MoMA visualizations: How is the structure of global cities evolving? How could telecommunications data allow us to gain new insights into the dynamics of globalization? How do byte transfers across the globe affect the need for travel and physical displacement, thus suggesting ideas for better sustainability at a global level?

"Our cursory analysis illustrates how telecom data can help us to expand our conception of global cities and their role in the process of globalization," said Ratti. "In the end, the NYTE project reveals as much about the city of New York as it does about its worldwide counterparts, in areas such as business, culture and immigration. In other words, our visualizations demonstrate that in the information age, urban life is as global as it is local."

All maps from the New York Talk Exchange will be on exhibit at MoMA until May 12, 2008, and simultaneously available on the senseable city laboratory's web site: http://senseable.mit.edu/nyte. For more information about "Design and the Elastic Mind," please visit www.moma.org.

Algorithms designed to ensure multiple users share a network fairly can’t prevent some users from hogging all the bandwidth.