Not as easy as it may seem 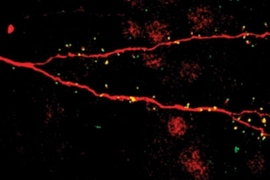 ↓ Download Image
Caption: The dendrite ofÂ a new neuron in the brain (labeled in red). The small yellow spots are synapses that the new neuron is receiving.
Credits: Image courtesy / Carlos E. Lois 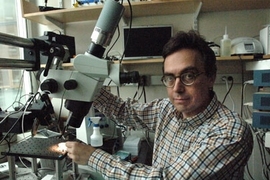 Caption:
The dendrite ofÂ a new neuron in the brain (labeled in red). The small yellow spots are synapses that the new neuron is receiving.
Credits:
Image courtesy / Carlos E. Lois

Using adult stem cells to replace neurons lost because of brain damage and disease could be more difficult than previously thought, according to MIT researchers, because newly formed brain cells receive messages before they are capable of sending them.

The work, published in a recent issue of the Proceedings of the National Academy of Sciences, has implications on the treatment of conditions such as Alzheimer's and Parkinson's.

Scientists have long speculated that replacing neurons damaged by neurological disease, brain injury or spinal-cord trauma would be an efficient way to reverse the negative effects of those conditions. But Carlos E. Lois, of the Picower Institute for Learning and Memory, found that adding new neurons to existing circuits would be akin to trying to integrate a new memory card into a running computer.

"Most likely, the computer software will crash because of the sudden addition of a new part to the hardware," said Lois, who is also an assistant professor of neuroscience in the departments of brain and cognitive sciences and biology. While new parts can be added to an off-line computer, the brain can never be completely shut down. "The addition and elimination of connections of new neurons would be disruptive to the existing brain circuit," he said.

In theory, newly created brain cells could be harvested and transplanted where they're needed to replace damaged cells.

New neurons grow from stem cells in only two small regions of the adult human brain: the olfactory bulb, involved in the sense of smell, and the hippocampus, involved in memory.

"Currently, there are two alternative strategies to replace lost neurons. The first one is based on redirecting the progeny of stem cells present in the brain to parts of the brain that have lost neurons," Lois said. "The second one utilizes stem cells grown outside of the body that are coaxed into becoming neurons and then grafted into the diseased areas of the brain."

Both of these strategies face a problem: When new neurons are incorporated into a brain circuit in an adult animal, they have to connect with pre-existing, working neurons.

However, the new neurons are immature and not ready to function, Lois said. They have to be "trained" by removing inappropriate connections and strengthening correct ones.

Lois, postdoctoral fellow Wolfgang Kelsch and Chia-Wei Lin, a graduate student in MIT's Department of Brain and Cognitive Sciences, found that new neurons added to the brains of adult animals develop input connections before they develop any output connections. That is, during this training period, new neurons "listen" before they "speak."

Further, once the new neuron does begin making output connections to other neurons, "it will be a noisy element," Lois said. "It will be communicating information to other neurons before [it] is appropriately tuned."

"Our results suggest that any attempts of neuronal replacement employing stem cells would likely need to address the issue of how the connections formed by new neurons will disrupt the function of old neurons during their training period," Lois said.

This work is supported by the David and Lucille Packard Foundation.