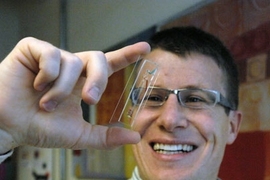 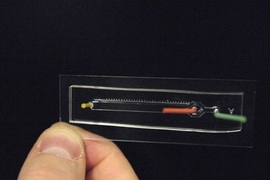 MIT researchers have created a microbial ecosystem smaller than a stick of gum that sheds new light on the plankton-eat-plankton world at the bottom of the aquatic food chain.

The work, reported in the January print issue of American Naturalist, may lead to better predictions of marine microbes' global-scale influence on climate.

Through photosynthesis and uptake of carbon compounds, diverse planktonic marine microorganisms --Â too small to be seen with the naked eye --Â help regulate carbon flux in the oceans. Carbon flux refers to the rate at which energy and carbon are transferred from lower to higher levels of the marine food web, and it may have implications for commercial fisheries and other ocean-dependent industries.

The MIT study is one of the first detailed explorations of how sea creatures so small --Â 500,000 can fit on the head of a pin --Â find food in an ocean-size environment.

Besides showing that microbes' swimming and foraging is much more sophisticated and complex than previously thought, the work also indicates that organic materials may move through the oceans' microbial food web at higher-than-expected rates, via a domino effect of resource patch formation and exploitation, said co-author Justin R. Seymour, postdoctoral fellow in the MIT Department of Civil and Environmental Engineering (CEE).

Using the new technology of microfluidics, Seymour and colleagues Roman Stocker, the Doherty Assistant Professor of Ocean Utilization in CEE, and MIT mechanical engineering graduate student Marcos devised a clear plastic device about the size and shape of a microscope slide.

Depending on the organism being studied, nutrients or prey are injected with a syringe-based pump into the device's microfluidic channel, which is 45 mm long, 3 mm wide and 50 micrometers deep. "While relying on different swimming strategies, all three organisms exhibited behaviors which permitted efficient and rapid exploitation of resource patches," Stocker said. It took bacteria less than 30 seconds, for example, to congregate within a patch of organic nutrients.

This new laboratory tool creates a microhabitat where tiny sea creatures live, swim, assimilate chemicals and eat each other. It provides the first methodological, sub-millimeter scale examination of a food web that includes single-celled phytoplankton, bacteria and protozoan predators in action.

"Rather than simply floating in the ocean and passively taking up the chemicals required for growth, many microbes exhibit sophisticated behaviors as they forage in an environment where patches of nutrients and resources are few and far between," Seymour said.

Oceanographic ecological research has typically taken place at much larger scales because of the difficulty of measuring the behavioral responses of small populations of microorganisms in very small volumes of seawater.

"To understand how environmental fluctuations affect the ecology of populations, it is imperative to understand the foraging abilities and behavior of marine microbes at environmentally relevant scales," the authors wrote.

This work was supported by the National Science Foundation.