Solving the mysteries of metallic glass 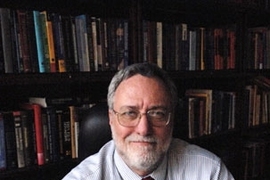 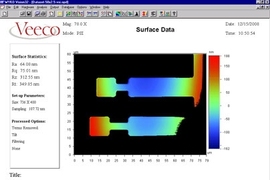 ↓ Download Image
Caption: To compare different alloy compositions for their glass-forming ability, the researchers deposited slightly different blends of two metals on each one of an array of many microscopic fingers, or cantilevers, two of which are seen here, so that their properties could be compared side by side.
Credits: Image courtesy / Carl V. Thompson

Caption:
To compare different alloy compositions for their glass-forming ability, the researchers deposited slightly different blends of two metals on each one of an array of many microscopic fingers, or cantilevers, two of which are seen here, so that their properties could be compared side by side.
Credits:
Image courtesy / Carl V. Thompson

Researchers at MIT have made significant progress in understanding a class of materials that has resisted analysis for decades. Their findings could lead to the rapid discovery of a variety of useful new kinds of glass made of metallic alloys with potentially significant mechanical, chemical and magnetic applications.

The first examples of metallic alloys that could be made into glass were discovered back in the late 1950s and led to a flurry of research activity, but, despite intense study, so far nobody had solved the riddle of why some specific alloys could form glasses and others could not, or how to identify the promising candidates, said Carl. V. Thompson, the Stavros Salapatas Professor of Materials Science & Engineering and director of the Materials Processing Center at MIT. A report on the new work, which describes a way to systematically find the promising mixes from among dozens of candidates, is being published this week in Science.

Glasses are solids whose structure is essentially that of a liquid, with atoms arranged randomly instead of in the ordered patterns of a crystal. Generally, they are produced by quickly cooling a material from a molten state, a process called quenching.

"It is very difficult to make glasses from metals compared to any other class of materials, such as semiconductors, ceramics and polymers," Thompson said. Decades of effort by scientists around the world have focused on "understanding and on exploiting the remarkable properties of these materials, and on understanding why some alloy compositions can be made into glasses and others cannot," he said.

They still haven't solved that "why," Thompson said. But this new work does "provide a very specific and quantitative new insight into the characteristics of liquid alloys that can most readily be quenched into the glassy state," he said, and thus provides a much more rapid way of discovering new alloys that have the right properties.

The research was the result of a collaboration between Thompson and MIT post-doc Johannes A. Kalb with Professor Yi Li and graduate student Qiang Guo at the National University of Singapore, working together across thousands of miles of separation through the Singapore-MIT Alliance. Essentially, the work consisted of producing an array of different alloys with slightly varying proportions of two metals, each deposited on a separate microscopic finger of metal. Then, they analyzed the changes in density of each different mixture when the glass crystallized, and found that there were a few specific proportions that had significantly higher density than the others -- and those particular alloys were the ones that could readily form glasses. Of three of these special proportions they found, two were already known glass-forming alloys, but the third was a new discovery.

The new work could even lead to a solution to the longstanding puzzle of why only certain alloys make glasses, he said. "I expect these new results, and the technique we developed to obtain them, will play a key, and hopefully decisive, role in solving the mystery of metallic glass formation."

Such materials could have a variety of applications because of their unusual physical and magnetic properties, Thompson said. They are "soft" magnetically, meaning that it's very easy to change the magnetic orientation of the material. This is a highly desirable characteristic for the cores of transformers, for example, which must switch their magnetic orientation dozens of times per second. Transformers made from metallic glasses could potentially greatly reduce the amount of electricity wasted as excess heat in conventional transformers, reducing the need for new generating plants.

In addition, these glasses are unusually hard mechanically and have a high degree of springiness (known technically as a high "elastic modulus"). This springiness could make them a useful material for some sports equipment such as golf clubs or tennis rackets, Thompson said. Although metallic glasses are relatively expensive, he said, for some people interested in the best-performing sports equipment, or in virtually unbreakable housings for cellphones, for example, "no expense is too high."

The new research is a major accomplishment for the Singapore-MIT Alliance, Thompson said, and would not have been possible without the high-quality communications and collaboration tools it provides. Despite their physical separation, "Prof. Li and I have been working together now for almost ten years," he said. "We routinely meet via video conferencing and have both been deeply involved in the co-supervision of the remarkable PhD student, Qiang Guo, who carried out this research."

Thompson said he sees such collaborations as a significant example of a growing trend. "I think this and other accomplishments within the SMA program demonstrate that the future of research lies in technology-mediated collaborations among people with common interests and complementary capabilities, regardless of where the different parts of the team are located," he said.

The research was supported by the SMA program, and Kalb was partially supported through a fellowship from the German Alexander Von Humboldt Foundation.