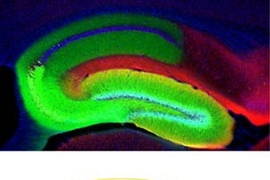 ↓ Download Image
Caption: The green-stained section of this mouse hippocampus represents where the new DICE-K technique blocked the neural-signal transmission in one of the hippocampal circuits of the brain.
Credits: Image / Toshi Nakashiba, MIT

Caption:
The green-stained section of this mouse hippocampus represents where the new DICE-K technique blocked the neural-signal transmission in one of the hippocampal circuits of the brain.
Credits:
Image / Toshi Nakashiba, MIT

Researchers at the Picower Institute for Learning and Memory at MIT report in the Jan. 24 online edition of Science that they have created a way to see, for the first time, the effect of blocking and unblocking a single neural circuit in a living animal.

This revolutionary method allowed Susumu Tonegawa, Picower Professor of Biology and Neuroscience, and colleagues to see how bypassing a major memory-forming circuit in the brain affected learning and memory in mice.

"Our data strongly suggest that the hippocampal neural pathway called the tri-synaptic pathway, or TSP, plays a crucial role in quickly forming memories when encountering new events and episodes in day-to-day life," Tonegawa said. "Our results indicate that the decline of these abilities, such as that which accompanies neurodegenerative diseases and normal aging in humans, is likely to be due, at least in part, to the malfunctioning of this circuit."

"The brain is the most complex machine ever assembled on this planet," Tonegawa said. "Our cognitive abilities and behaviors are based on tens of thousands of molecules that compose several billion neurons, as well as how those neurons are connected.

"One effective way to understand how this immensely complex cellular network works in a major form of cognition like memory is to intervene in the specific neural circuit suspected to be involved," he said.

The hippocampus, a seahorse-shaped brain region, plays a part in memory and spatial navigation. In Alzheimer's disease, the hippocampus is one of the first regions to suffer damage; memory problems and disorientation are among the disease's first symptoms.

The hippocampus is made up of several regions--CA1, CA3 and the dentate gyrus--that are wired up with distinct pathways.

The MIT study sought to determine how the interactions between neural pathways and the hippocampal regions affect learning and memory tasks.

Imagine that the three hippocampal regions are computers, and neural pathways are the conduits through which the computers get data from all over the brain. The computers perform different tasks, so the types of data processing will depend on which conduits the data travels through.

The hippocampus has two major, parallel information-carrying routes: the tri-synaptic pathway (TSP) and the shorter monosynaptic pathway (MSP). The TSP includes data processing from all three hippocampal regions, whereas the MSP skips through most of them.

Using DICE-K, the researchers were surprised to find that mice in which the major TSP pathway was shut down could still learn to navigate a maze. The shorter MSP pathway was sufficient for the job.

However, the maze is a task that is slowly learned over many repeated trials. When the mice were tested with a different task in a new environment that required rapid learning and memory formation, the researchers found that the mice with TSP shut down could not perform the task. Thus, the TSP pathway is required for animals to quickly acquire memories in a new environment. "This kind of learning results in the most sophisticated form of memory that makes animals more intelligent and is known to decline with age," Tonegawa said.

This work is supported by the National Institutes of Health and the RIKEN Brain Science Institute.