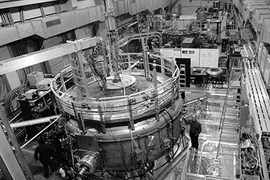 Caption:
Senior research scientist Jay Kesner stands by the now-operational LDX fusion reactor, in which a series of experiments are being run.
Credits:
Photo / Donna Coveney

An MIT andÂ Columbia University team has successfully tested a novel reactor that could chart a new path toward nuclear fusion, which could become a safe, reliable and nearly limitless source of energy.

Begun in 1998,Â the Levitated Dipole Experiment, or LDX, uses a unique configuration where its main magnet is suspended, or levitated, by another magnet above. The system began testing in 2004 in a "supported mode" of operation, where the magnet was held in place by a support structure, which causes significant losses to the plasma--a hot, electrically charged gas where the fusion takes place.

LDX achieved fully levitated operation for the first time last November. A second test run was performed on March 21-22 of this year, in which it had an improved measurement capability and included experiments that clarified and illuminated the earlier results. These experiments demonstrate a substantial improvement in plasma confinement--significant progress toward the goal of producing a fusion reaction-- and a journal article on the results is planned.

Fusion--the process that provides the sun's energy--occurs when two types of atoms fuse, creating a different element (typically helium) and releasing energy. The reactions can only occur at extremely high temperatures and pressures. Because the material is too hot to be contained by any material, fusion reactors work by holding the electrically charged gas, called plasma, in place with strong magnetic fields that keep it from ever touching the walls of the device.

The LDX reactor reproduces the conditions necessary for fusion by imitating the kind of magnetic field that surrounds Earth and Jupiter. A joint project by MIT and Columbia University, it consists of a supercooled, superconducting magnet about the size and shape of a large truck tire. When the reactor is in operation, this half-ton magnet is levitated inside a huge vacuum chamber, using another powerful magnet above the chamber to hold it aloft.

The advantage of the levitating system is that it requires no internal supporting structure, which would interfere with the magnetic field lines surrounding the donut-shaped magnet, explains Jay Kesner of MIT's Plasma Science and Fusion Center, joint director of LDX with Michael Mauel of Columbia. That allows the plasma inside the reactor to flow along those magnetic field lines without bumping into any obstacles that would disrupt it (and the fusion process).

To produce a sustained fusion reaction the right kinds of materials must be confined under enormous, pressure, temperature and density. The "fuel" is typically a mix of deuterium and tritium (known as a D-T cycle), which are two isotopes of hydrogen, the simplest atom. A normal hydrogen atom contains just one proton and one electron, but deuterium adds one neutron, and tritium has two neutrons. So far, numerous experimental reactors using different methods have managed to produce some fusion reactions, but none has yet achieved the elusive goal of "breakeven," in which a reactor produces as much energy as it consumes. To be a practical power source, of course, will require it to put out more than it consumes.

If that can be achieved, many people think it could provide an abundant source of energy with no carbon emissions. The deuterium fuel can be obtained from seawater and there is a virtually limitless supply.

Most fusion experiments have been conducted inside donut-shaped (toroidal) chambers surrounded by magnets, a design that originated in the Soviet Union and is called by the Russian name Tokamak. MIT also operates the most powerful Tokamak reactor in the United States, the Alcator C-mod, which is located in the same building as the new LDX reactor. Tokamaks require a large number of magnets around the wall of the torus, and all of them must be working properly to keep the plasma confined and make fusion possible.

The new approach to fusion being tested in the LDX is the first to use the simplest kind of magnet, a dipole--one that has just two magnetic poles, known as north and south, just like the magnetic fields of Earth and Jupiter. Tokamaks and other fusion reactor designs use much more complex, multi-poled magnetic fields to confine the hot plasma.

Unlike the Tokamak design, in which the magnetic field must be narrowed to squeeze the hot plasma to greater density, in a dipole field the plasma naturally gets condensed, Kesner explains. Vibrations actually increase the density, whereas in a Tokamak any turbulence tends to spread out the hot plasma.

The renowned physicist Richard Feynman once compared confining a plasma inside the magnetic field in a Tokamak to "trying to hold Jell-O with rubber bands," says LDX chief experimentalist Darren Garnier of Columbia. "It's the difference between pulling and pushing." Whereas the Tokamak's magnetic field tries to push the plasma in from the outside, "we have the field lines on the inside, pulling on the plasma," which is inherently more stable, he says.

Another potential advantage of the LDX approach is that it could use a more advanced fuel cycle, known as D-D, with only deuterium. Although it's easier to get a self-sustaining reaction with D-T, tritium doesn't exist naturally and must be manufactured, and the reaction produces energetic neutrons that damage the structure. The D-D approach would avoid these problems.

The LDX magnet has coils made of superconducting niobium-tin alloy, which loses all electrical resistance when cooled below about 15 degrees Kelvin; in the device, it is cooled to 4 degrees Kelvin--4 degrees above absolute zero, or minus 269 degrees Celsius, a temperature that can only be achieved by surrounding the coils with liquid helium. This is the only superconducting magnet currently used in any U.S. fusion reactor.

Besides providing data that might someday lead to a practical fusion reactor, the experimental device could provide important lessons about how planetary magnetic fields work, which is still poorly understood. So the experiment is of great interest to planetary physicists as well as to energy researchers.

Keeping the huge magnet levitated to just the right height requires a feedback system that constantly monitors its position, using eight laser beams, and then adjusts the power of the lifting magnet accordingly. "That was tricky to develop," Garnier says, and in early experiments "we did drop it a couple of times." Fortunately, they had designed the structure with a spring-mounted lifter under the magnet, used to lift it into its starting position, which could absorb the falling weight without damage.

The work is funded by the U.S. Department of Energy.