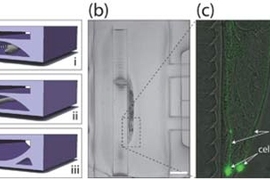 An MIT team has improved upon its landmark technology reported last year in which the researchers used a fingernail-sized lab on a chip to image, perform surgery on and sort tiny worms to study nerve regeneration.

The team has found a unique way to immobilize the animals while they are still awake for several minutes with unprecedented stability, which then allowed the researchers to conduct fast, detailed three-dimensional imaging and to perform high-resolution laser nanosurgery on the animals.

The advance, which builds on a technology first reported last year, could ultimately help researchers better understand the genetic underpinnings of regeneration and degeneration in the nervous system--not just in the worm but in more complex organisms including humans. That, in turn, could help in treatments of neural injuries and diseases such as Parkinson's and Alzheimer's.

Led by Mehmet Fatih Yanik, MIT assistant professor of electrical engineering and computer science, the team reported its latest work in the April 2 advanced online issue of the journal Lab on a Chip. The work involves the C. elegans worm, one of the tiniest multi-cellular organisms known. Smaller than a human hair, the worm is considered a key model for investigating a variety of biological phenomena such as aging, fat metabolism and neurological diseases.

Geneticists have been studying C. elegans since the 1960s, but the manual processes they used to do so were painstaking and time-consuming. That changed in a big way last year when Yanik and colleagues reported in the Proceedings of the National Academy of Science that they had developed a microfluidic chip to automate and accelerate research on the tiny worms. Essentially, the tiny worms are flowed inside the chip, immobilized by suction and imaged with a high-resolution microscope.

The research published this month goes one step further. Yanik and two collaborators, lead authors Fei Zeng, a postdoctoral fellow in the Research Laboratory of Electronics, and Christopher B. Rohde, a graduate student in electrical engineering and computer science, said they were able to render the animals motionless in the chip with an unprecedented stability for several minutes instead of seconds. This then allowed them not only to conduct three-dimensional imaging of the worms at the sub-cellular resolution but also to reliably operate on the animals with a high-precision surgery laser to study neural degeneration and regeneration on the chip. Yanik's team had previously demonstrated that neural regeneration can be studied in C. elegans using femtosecond laser micro-surgery.

"This new technology is allowing us to study the entire genome of the animal in very short periods of time," Yanik said. "We are currently combining it with genetic and drug screens to study neural regeneration on these animals."

The research was funded by NIH Director's New Innovator Award (1-DP2-OD002989-01) and Packard Award in Engineering and Science, and Merck & Co. Inc.