On a roll: Students help bring mobility to developing countries 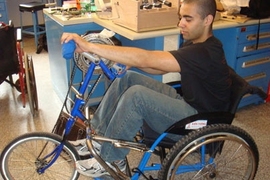 ↓ Download Image
Caption: James Levi Schmidt, a member of an MIT class on wheelchair design for the developing world, tests a prototype of a wheelchair that was converted into a tricycle powered by hand-operated pedals.
Credits: Photo / Sarah Cooper-Davis

Caption:
James Levi Schmidt, a member of an MIT class on wheelchair design for the developing world, tests a prototype of a wheelchair that was converted into a tricycle powered by hand-operated pedals.
Credits:
Photo / Sarah Cooper-Davis

Throughout the developing world, 20 million people need wheelchairs but are unable to get them. And even the lucky ones who do get them--usually through charitable donations--often get chairs designed for the smooth floors and sidewalks of the industrialized world, which can be difficult or even impossible to use on the unpaved roads and narrow hallways that people often face.

Amos Winter, an MIT graduate student in mechanical engineering, has spent much of the last three years trying to address these problems by working with wheelchair workshops in various countries in Africa and Asia to help develop new designs. His focus has been on chairs that work better under the rough conditions they face in each location, that can be made locally with readily available materials and by local workers, and that are rugged enough to stand up to the rough roads, gear-clogging dust and wet and muddy conditions they often face.

This semester, for the second time, Winter also taught a class on wheelchair design for the developing world. The 22 students in this year's class split into five teams and each came up with new variations on how to help bring mobility to people whose lives could be dramatically changed by it.

One team came up with a clever adapter to turn a conventional four-wheeled chair into a tricycle powered by hand-operated pedals. Many people who can't walk use such pedal-powered tricycles to travel long distances along dirt roads, because the three-wheeled structure is much more stable than a four-wheeler on uneven surfaces, and turning pedals by hand is a much more efficient way of covering long distances than turning the rims of the large rear wheels of conventional wheelchairs.

But such chairs are larger and heavier than conventional ones and are often not suitable for indoor use. While some people use two different chairs, one for indoors and the other for covering long distances, that's an option that's unaffordable by many people--and takes up a lot of extra space even for those who can afford it.

So this team developed an attachment made out of ordinary bicycle parts--easy to obtain in most developing nations--that simply clamps onto the front of a regular wheelchair, raising its two small front wheels off the ground and substituting a bicycle wheel further out in front. The attachment also uses the bicycle's gearing system to allow more efficient power for climbing steep slopes. The whole attachment could be built for well under $100, the team concluded--a fraction of the cost of a separate chair.

Two other teams concentrated on developing attachments to help people who use wheelchairs to be able to work and earn a living. One of these is a small cart that can be towed behind the chair, to enable people to carry heavy loads without the strain and awkwardness of having to balance it on their laps as the move around. For example, in many countries where women are expected to fetch water for the household, often over long distances, this cart would allow them to easily carry a large bucket behind them, without affecting the stability or mobility of the chair.

The other attachment is a table that snaps onto the front of the chair, above the armrests, with a set of tough nylon bags attached. This would allow people in wheelchairs to carry products with them, and then display them conveniently for sale on the table. Street vending is a very common source of income in many developing nations, and this attachment could help disabled people become self-supporting.

All of the designs were developed in close consultation with people who work on wheelchair construction in Tanzania, Kenya, Vietnam, the Philippines and other locations in the developing world, so the designs, materials and construction methods were carefully chosen to be appropriate and accessible. These consultations were made possible by partnerships Winter has formed with 13 wheelchair workshops--the local companies that develop chairs adapted to the specific needs of local conditions--in nine different countries.

This summer, several of the students will travel to some of those countries, some with the help of grants from MIT's Public Service Center, to further develop these concepts into production-ready prototypes. "We really try to foster the collaborative aspect of this class," Winter says. "We're not trying to solve problems for the people in these countries, we're trying to solve problems with them."

Because of this close collaboration, Winter says that "these all have a pretty good likelihood of being applied" to real production. Of the four other designs developed during last year's class, he says, three are actively being produced, and elements of the fourth are also being applied.

Without access to a wheelchair, Winter says, "most people were using crawling as their primary means of getting around." So providing affordable, appropriate chairs is "a huge need, with a huge potential for impact. It means these people can go out and get a job, instead of staying around the house."