A leg to stand on 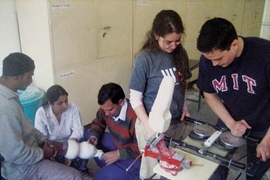 Caption:
MIT students Maria Luckyanova and Philip Garcia (at right) operate their prosthetic-fitting device at the Jaipur Foot Organization headquarters in India in January, as JFO specialists work on fitting a prosthetic leg on a patient.
Credits:
Photo / Goutam Reddy

In the United States, a typical prosthetics specialist who fits artificial legs for amputees might handle 15 or 20 such patients a year, fitting them with custom-built legs that can cost upward of $6,000 apiece. Each patient then gets a series of follow-up visits to make sure the new limb was properly fitted.

But in India, the Jaipur Foot Organization handles that many patients every day in each of its local centers. The charity is the world's largest provider of prosthetics and has worked with about a million patients since being founded in 1975.

The JFO, also known as Bhagwan Mahavir Viklang Sahyata Samiti, is based in Jaipur, a city of more than three million people that is the capital of Rajhastan in northern India. The artificial legs they provide, based on a locally developed design, cost about $40, and the company has little time or funding for follow-up consultations, or for developing new methods.

A team of MIT students has been working on a new device that could greatly simplify the process of fitting these legs, producing a better fit while eliminating some steps in the process and reducing waste materials. The hand-powered system, which requires no external power, would also greatly simplify the fitting of legs in rural areas, where the present electrically powered fitting system requires bringing along a bulky generator.

The first step in fitting a leg is to make a mold of the person's stump to provide a precise fit. This is done by placing the stump into a container filled with tiny glass beads and covered with soft silicone rubber, and then creating a vacuum so that the beads seal tightly around the limb. This "negative" mold is filled with more glass beads (referred to as "sand") to form a positive mold--an exact replica of the stump--and the socket of the prosthetic leg is made to fit that replica. Alternatively, the two steps can be done with plaster of paris instead of the sand--a process that doesn't require electricity but does use heavy, non-reusable plaster.

The MIT system was designed under the auspices of the D-Lab in the Department of Mechanical Engineering. Mechanical engineering students Philip Garcia, Maria Luckyanova and Tess Veuthey, physics student Jessica Schirmer, and D-Lab instructor Goutam Reddy have been working on the project--some of them for more than a year.

The new fitting system they devised uses a handcrank to produce the vacuum, eliminating the need for electric power. And the same device can be used to produce both the initial negative mold and the positive mold that replicates the shape of the stump.

Garcia, Luckyanova, Reddy and Schirmer spent two weeks at the Jaipur facility this January, thanks in part to a grant from MIT's Public Service Center and a $7,500 award from last year's IDEAS competition. They did one test run of a fitting, and the JFO personnel were very impressed.

"They were really pleased with the results," Luckyanova says. They liked the fact that the new system produced less waste, required no electricity and seemed to produce a better fit that might lead to a longer-lasting prosthetic. That's because the plaster of paris in the traditional method shrinks slightly as it hardens, making the fit less exact.

The Jaipur technicians also had some useful suggestions for simplifying and streamlining the device. "Basically, they wanted a black box," Garcia says, a system in which the working parts are hidden from view and would be simple to set up and use in the field. The students are now hard at work refining the design in a seminar class they are conducting this semester that includes about 20 students from a variety of different disciplines.

After that, "this summer we'll do some field testing" back in Jaipur, Luckyanova says. The Jaipur company is so busy serving patients that they don't have much time to work on researching better systems, Luckyanova says, so they were delighted to have MIT's help on that part of the process.

The trip to India was a big eye-opener for the students. Garcia says, "I learned a lot about the world." He's not sure what he intends to do after he graduates this spring but says that it will "probably be something involving the developing world."

Luckyanova says this project "changed my perspective a lot." While she enjoys working on high-tech engineering projects, she says, with this project, "you feel such a sense of accomplishment when you see that something you made can affect people's lives right away. It is very gratifying."

In the World is a column that explores the ways people from MIT are using technology--from the appropriately simple to the cutting edge--to help meet the needs of local people in places around the planet. If you know of a good example and would like the News Office to write about it, please e-mail dlc1@mit.edu.

A version of this article appeared in MIT Tech Talk on March 5, 2008 (download PDF).