What is good water worth? 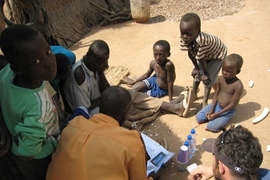 MIT Senior Lecturer Susan Murcott started a nonprofit enterprise in 2005 to sell a simple, low-cost ceramic water filter system to residents of northern Ghana, home to the country's most contaminated water supplies. The system, which consists of a terracotta pottery vessel and a plastic bucket with a tap, is designed to remove bacteria, viruses and other hazards from drinking water.

Seeking to help people who earn less than $1 a day, Murcott's company, Pure Home Water, had priced the water filter system at or below cost--meaning PHW has depended on grants and donations to stay in business. But it turns out the price doesn't have to be so low, at least according to MIT market research.

This January, 15 MIT business and engineering students spent four weeks in Ghana conducting water tests and a detailed survey of people's needs in an effort to provide guidance for PHW's future plans. The group, working with the Global Entrepreneurship Laboratory (G-Lab) of the MIT-Sloan School of Management, interviewed more than 200 people, half in the city and half in the countryside, to find out what were the most important features they wanted from a water filter.

Surprisingly, says Sloan student Matthew Thomson, who was part of the team that did the survey, out of five factors people were asked about price turned out to be the least important. First and foremost, people wanted the system that would produce the greatest health benefits. "They were much more worried about how much health improvement they got," Thomson said. A close second was the type of water treatment product , with durable products that seemed familiar--and the PHW filter fit this bill--being the most desirable.

In the survey, which took about 45 minutes for each person or family, people were asked to choose among three different sets of features at a time, each with a different mix of characteristics. They were also given samples of the water produced by each of the choices, so they could evaluate it for appearance and taste.

The PHW filters are designed to serve the needs of about six people, but the team found that the average family size in the region is more than 12, so a filter with twice the capacity would have great appeal.

But the other recommendation the team made to the company was to raise the price for the filter, given the surprisingly low impact of cost on the choices made by even these very low-income people, particularly those living in urban areas. As counter-intuitive as that may seem, Thomson said, "that leads to a long-term payoff for PHW--the price increase can allow it to become a sustainable business that doesn't need grants and outside sources of money to continue operations."

Like consumers everywhere, it turned out that the people in Ghana tended to equate a higher price with better quality. "They figured that it's going to work better, and be less likely to break" if it costs a bit more, Thomson found.

Avani Kadala, another Sloan student who was a member of the team, said "it can be very hard to align the goals of an organization that is focused on a social mission and not on a bottom line." For such groups, she said, it is understandable that "it seems easier to make short-term decisions, such as to sell below cost, which may lead to an unsustainable business in the long run."

Kadala, who had worked at J.P. Morgan before coming to MIT, had never experienced the kind of extreme rural environment and poverty she found in Ghana, and found it to be a great learning experience.

A version of this article appeared in MIT Tech Talk on April 9, 2008 (download PDF).