Digging out from piles of sticky notes 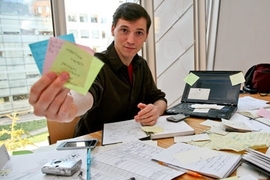 Everyone has them -- little squares of colorful paper stuck on monitors, business cards strewn across desks, and to-do lists tucked away in pockets. These information scraps feature critical phone numbers, meeting dates and shopping lists -- and they have an alarming tendency to vanish just when you need them.

In an attempt to better organize those scraps, a team of MIT computer scientists has developed several software programs that allow users to easily enter, store and retrieve all kinds of information, from e-mail addresses to a list of restaurants you've visited.

The researchers, led by MIT Professor of Electrical Engineering and Computer Science David Karger, consider sticky notes ideal for certain problems, but think many of the tasks people use them for would be better handled by a computer.

"I would never make the claim that we're trying to replace Post-its," says Michael Bernstein, a graduate student in Karger's lab, part of MIT's Computer Science and Artificial Intelligence Laboratory. "We want to understand the classes of things people do with Post-its and see if we can help users do more of what they wanted to do in the first place."

After studying how people keep track of their information scraps, the team has developed and tested a few different systems to help handle such odds and ends, from comprehensive programs that capture broad context for every scrap, to streamlined, web-based note-taking software.

In their 2007 study of personal information scraps, the team found scraps not only on sticky notes, but an array of other improvised tools -- notebooks, whiteboards, text files, Internet bookmarks, and e-mails to oneself.

"We started out asking what people do with Post-it notes, and it spiraled into something much bigger -- a study of how people intentionally misuse all of those systems that are supposed to help you," says Bernstein, who has worked closely with graduate student Max Van Kleek on the information scrap project.

In addition to to-do lists and phone numbers, the researchers found many other unique kinds of information, including fantasy football rosters, travel price comparisons, and a list of guitar chords.

Such information is difficult to capture because there are no specific computer applications designed to store them. Many people don't even use specific systems such as calendars and address books due to lack of what the researchers term "lightweight capture." If too much time and effort is required to store information, most people won't bother.

However, that means there is no easy way to find that phone number, recipe or other note to yourself when you need it. "You can't retrieve it on your computer if it never got put in," says Karger.

The group has explored a variety of tools aimed at increasing the flexibility and decreasing the burden of information capture. The first, called Jourknow, captured context every time the user made a note, such as where he was and what web site he was looking at. That feature saves the user the work of entering all that information, and the extra context makes it easier to find stored information later on, but all that extra work made the system too slow and complicated. Â

A second effort, Inky, was co-developed with Robert Miller, the NBX Career Development Associate Professor in the Department of Electrical Engineering and Computer Science, and with graduate student Vikki Chou. Inky tried to "understand" the notes users were writing and automatically place them in the right applications, for example reserving a conference room on the lab's booking system when the user typed "meeting John 5pm."

Most recently, the group has been developing a tool called list.it, which focuses entirely on minimizing the time and effort needed to capture information. List.it is a simple web-browser-based note-taking tool that allows users to jot down short notes. Once the information is stored, it can be easily searched for later retrieval.

In a study to be presented at the CHI human-computer interaction conference next spring, the researchers found that list.it enabled users to quickly capture information and find it later. People who tested the system began to use list.it to store to-dos, appointments and other information that was previously never captured or had lived in other applications, due in part to the speed with which they could interact with the system.

"Even a simple text capture box and a text search box is well suited to a task that is both common and important: managing the small information scraps that fall between the cracks of traditional information management tools," the researchers concluded.

The researchers encourage interested users to try out list.it for themselves. The program can be downloaded at http://listit.csail.mit.edu.

Graduate student Katrina Panovich is also working on the information scrap project, which is funded by the Nokia Research Center Cambridge, the National Science Foundation, the Royal Academy of Engineering, the Web Science Research Initiative and Quanta Computer. Bernstein is supported by a Xerox-MIT Fellowship.