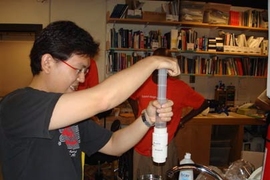 About 60 people from 20 nations will descend on the MIT campus next week to begin an intensive month-long process of creating technological solutions for the needs of people in the world's developing nations. The goal of the program is to develop simple, inexpensive devices that in some cases can be produced locally and make a real difference for people and communities.

This year's International Development Design Summit, which begins Monday, July 14, and runs through Aug. 8, is the second incarnation of the workshop. The event, which was the brainchild of MIT Senior Lecturer and D-Lab founder Amy Smith, a past winner of the MacArthur "genius" grant, is co-sponsored by MIT, Olin College, Caltech and Cooper Perkins, a local design firm.

As they did last year, participants will split into about 10 teams that will each spend the four weeks developing some piece of technology that in some cases could be built using local tools and materials and meet significant needs of local people in the developing world -- especially in small, rural communities. In many cases, building, selling and operating these devices could also become a source of revenue and jobs at the local level.

This year's IDDS organizing team includes several of the participants from last year's inaugural conference. "It is wonderful to have them back on campus and hear what they have been up to since last year's summit," says Smith. "In many cases, IDDS really changed the direction of their lives." The event is intended as a collaboration between people of a wide range of backgrounds: students, faculty, mechanics, social workers, doctors, carpenters, farmers, and professors from around the world, who will join forces to build technologies that could improve the quality of life in the developing world.

Several of the technologies that were developed during last year's summit, including transparent containers for transporting and sterilizing water, devices for reducing the smoke from cooking fires, and low-cost refrigeration systems, are on their way to being produced in various countries around the world, Smith says.

As Niall Walsh, a student from Trinity College Dublin who is helping to organize the event, describes it in his blog in which he is tracking the whole progress of the conference, its purpose is to "challenge convention by creating physical solutions. A team â€¦ from around the world will work together to attempt to create, within a few weeks, technologies that could change lives."

The event is partly funded by the Rockefeller Foundation; the National Collegiate Inventors and Innovators Alliance; Continuum, a local design firm; and by MIT's Public Service Center and International Development Initiative.