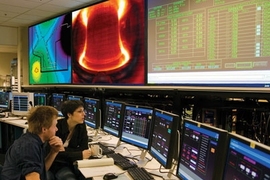 Research carried out at MIT's Alcator C-Mod fusion reactor may have brought the promise of fusion as a future power source a bit closer to reality, though scientists caution that a practical fusion powerplant is still decades away.

Fusion, the reaction that produces the sun's energy, is thought to have enormous potential for future power generation because fusion plant operation produces no emissions, fuel sources are potentially abundant, and it produces relatively little (and short-lived) radioactive waste. But it still faces great hurdles.

"There's been a lot of progress," says physicist Earl Marmar, division head of the Alcator Project at the MIT Plasma Science and Fusion Center (PSFC). "We're learning a lot more about the details of how these things work."

One of the most vexing issues facing those trying to construct a fusion plant that produces more power than it consumes (something never achieved yet experimentally) is how to propel the hot plasma (an electrically charged gas) around inside the donut-shaped reactor chamber. This is necessary to keep it from losing its heat of millions of degrees to the cooler vessel walls. Now, the MIT scientists think they may have found a way.

Physicist Yijun Lin and principal research scientist John Rice have led experiments that demonstrate a very efficient method for using radio-frequency waves to push the plasma around inside the vessel, not only keeping it from losing heat to the walls but also preventing internal turbulence that can reduce the efficiency of fusion reactions.

"That's very important," Marmar says, because presently used techniques to push the plasma will not work in future, higher-power reactors such as the planned ITER (International Thermonuclear Experimental Reactor) now under construction in France, and so new methods must be found. "People have been trying to do this for decades," he says.

Lin says that "some of these results are surprising to theorists," and as yet there is no satisfying theoretical foundation for why it works as it does. But the experimental results so far show that the method works, which could be crucial to the success of ITER and future power-generating fusion reactors. Lack of a controllable mechanism for propelling the plasma around the reactor "is potentially a showstopper," Rice says, and the ITER team is "very concerned about this."

Rice adds that "we've been looking for this effect for many years," trying different variations of fuel mixture, frequency of the radio waves, and other parameters. "Finally, the conditions were just right." Given that the ITER project, which will take 10 years to build, is already underway, "our results are just in time for this," Lin says. These results are being published in Physical Review Letters on Dec. 5.

A number of other recent findings from Alcator C-Mod research could also play a significant role in making fusion practical, and several papers on these new results were presented at the Plasma Physics Divisional meeting of the American Physical Society held in November.

One of these is a method developed by Dennis Whyte and Robert Granetz for preventing a kind of runaway effect that could cause severe damage to reactor components. When a fusion reactor is in operation, any disruption of the magnetic field that confines the super-hot plasma could cause a very powerful beam of "runaway electrons," with enough energy to melt through solid steel. This would not be dangerous to personnel because everything is well-shielded, but it could cause hardware damage that would be expensive and time-consuming to repair.

But Whyte and Granetz have developed a kind of high-powered fire extinguisher for such runaway beams: A way of suddenly injecting a blast of argon or neon gas into the reactor vessel that turns the plasma energy into light, which is then harmlessly absorbed by the reactor walls, and suppresses the beam by apparently making the magnetic fields more disorganized.

For about a thousandth of a second, Whyte says, this brilliant flash of light is the world's brightest light --Â the equivalent of a billion-watt bulb --Â though it's in a place where nobody can directly see it.

Because the Alcator C-Mod's design is very closely matched to that of ITER, "we are uniquely positioned to explore what happens when these disruptions occur," Whyte says. ITER will be 10 times the diameter, with a thousand times the energy, so if this quenching system is used there it would produce a trillion-watt bulb -- for a fleeting instant, nearly equivalent to the total electricity output of the United States.