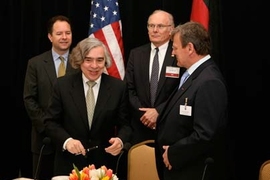 MIT and Fraunhofer, a German research organization, have signed an agreement to establish a research center in Massachusetts focused on significantly reducing the cost of solar energy over the next five years. The MIT-Fraunhofer Center for Sustainable Energy Systems will develop cutting-edge technologies and materials for designing and producing better solar modules.

Located adjacent to the MIT campus, the center will be active in other areas of sustainable energy research as well, including developing new technologies to substantially reduce the energy consumption of new andÂ retrofitted structures by adapting state-of-the-art building technology. The center also aims to develop a portfolio of new efficiency and solar technologies that maximize MIT's world-class capabilities in advanced materials R&D and computer simulation.

Professors Ernest Moniz, director of the MIT Energy Initiative (MITEI), and Eicke Weber, director of the Fraunhofer Institute for Solar Energy Systems, announced the agreement that will lead to the creation of the new center Saturday, April 12, at the MIT Energy Conference. Also participating in the ceremony were MIT President Susan Hockfield, German foreign minister Frank-Walter Steinmeier, Karl Weiss, chairman of the board of the Massachusetts Technology Collaborative, and Ian Bowles, Massachusetts secretary of energy and environmental affairs, and Larry Reilly with National Grid.

"This partnership will pair the outstanding basic energy research capabilities at MIT with the world-class applied research capabilities of the Fraunhofer Institute," said Moniz, the Cecil and Ida Green Professor of Physics. "The research focusing on solar energy and on building efficiency address extremely important technologies for both long- and short-termÂ response to global energy challenges. Also, the strong support of the Commonwealth, the Massachusetts Technology Collaborative and National Grid represents the kind of public-private partnership that we will need to succeed."

Start-up costs of the center will be funded with $5 million from the Massachusetts Technology Collaborative. National Grid, the principal member of the Center's Partnership with Industry, also committed to support the center with a pledge of $1 million over five years.

"The Fraunhofer Institute for Solar Energy Systems has been highly successful over 25 years in developing technologies in the areas of renewable energy and energy efficiency, and transferring these innovations to industry," said Weber. "I expect that our new Center for Sustainable Energy Systems at MIT will be as successful here in Massachusetts and help achieve the state's goals in climate protection."

Nolan Browne, MIT alumnus and founder of the MIT Energy Conference, will serve as the center's managing director. In addition, Tonio Buonassisi, assistant professor of mechanical engineering at MIT and the center's planned scientific director, is one of the leading solar technologists in the U.S. today. Roland Schindler, the center's executive director, is a 24-year Fraunhofer veteran who will serve as a liaison between the MIT team and Germany, ensuring that activities are aligned. Four out of the nine members of the board of advisors are MIT professors.Â

A version of this article appeared in MIT Tech Talk on April 16, 2008 (download PDF).