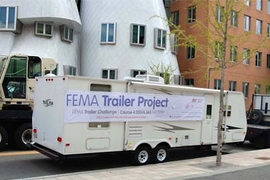 ↓ Download Image
Caption: A FEMA trailer en route to the MIT campus, where it will form the centerpiece of a new course on research as artistic practice.
Credits: Photo / Jegan Vincent de Paul 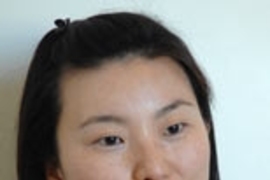 Caption:
A FEMA trailer en route to the MIT campus, where it will form the centerpiece of a new course on research as artistic practice.
Credits:
Photo / Jegan Vincent de Paul

A little bit of hurricane history has come to MIT. A FEMA trailer, one of thousands of mobile homes the Federal Emergency Management Agency purchased to shelter victims of hurricanes Katrina and Rita, is now parked in an MIT rental space at 620 Putnam Ave. in Cambridge.

Jae Rhim Lee, lecturer in the visual arts program, began organizing the FEMA trailer's trip to MIT in 2007. That year, thousands of the mobile units were sent to surplus yards after formaldehyde, an embalming fluid used in manufacturing the trailers, was found to cause illness in trailer residents.

Lee worked through FEMA and the Pennsylvania Surplus Property Division to have the trailer donated and delivered to Cambridge on April 30. The previously unused trailer now has a new lease on life: It will serve as centerpiece for a new course on research as artistic practice and for the MIT FEMA Trailer Challenge, organized with the Public Service Center, providing students with a laboratory in which to explore building techniques and environmental health and justice issues, Lee says.

"The trailers are a symbol of response to disaster, and they are the response. Having one here provides a hands-on way to study the history of emergency management after Katrina," says Lee SM '06, a specialist in built forms, such as coffins, and biological types, such as mushrooms, that straddle life and death.

Lee has seen emergency management after Katrina up close. She volunteered in New Orleans on the architecture department's LIFT House project in 2005 and still works at the city's Office of Recovery Development and Management. The trailers, she says, provide both shelter and a constant reminder of how many Gulf Coast residents remain isolated and traumatized.

"There are historical, psychosocial, technical and scientific issues to explore, with the trailer as a lab and an anchor," Lee says.

By spring, co-teaching with Ute Meta Bauer, associate professor and director of the visual arts program, she had assembled a FEMA trailer team of five undergraduate and graduate students. She devised the interdisciplinary FEMA Trailer Project course, the point of departure for a visual arts program lecture series on zones of emergency.

The FEMA Trailer Project will focus on historical, design and environmental issues in the fall. There's an economic component, too--currently, FEMA has about 41,000 unused trailers for sale.

"The trailer is a heavy symbol. Now that we've got one here, I want students to engage hands-on with the materials and the questions. For example, how can this be used? If the materials are safe, could it be a mobile health-care unit? A food pantry? A trauma center? It's a great laboratory," Lee says.

Student projects in the FEMA trailer course include developing a life-cycle analysis to investigate the trailer's environmental impact, from manufacturing to disposal or recycling; full environmental testing of materials and air quality in the trailer and interviews with current and former trailer residents. It's unclear whether MIT's trailer is tainted by formaldehyde; people visiting or working in the trailer aren't required to take any special precautions.

The MIT FEMA Trailer Project, comprised of the Trailer Challenge and the course, received funding from the MIT Council for the Arts and the Visual Arts Program.

At the conclusion of the course, the Visual Arts Program and the School of Architecture and Planning will donate the trailer to a community organization, according to Lee.