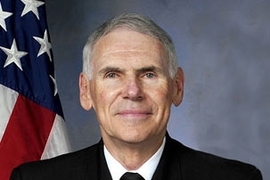 Admiral William J. Fallon will join the MIT Center for International Studies as a Robert E. Wilhelm Fellow. Admiral Fallon, the former commander of U.S. Central Command and U.S. Pacific Command, will make the Center his academic home for nine months, starting August 2008. As a Wilhelm Fellow, he will collaborate with the MIT community in research, seminars, conferences and other intellectual projects.

"The Center for International Studies is delighted to be the home for one of America's most distinguished military officers and diplomats. Admiral Fallon brings to our researchers and students a wealth of experience at the highest levels of strategic thinking in many of the world's most demanding assignments. His presence and engagement in our intellectual life will make us all better students of world affairs," said Richard Samuels, director of the Center for International Studies and Ford International Professor of Political Science at MIT.

Admiral Fallon led U.S. Central Command (CENTCOM), one of five geographic joint military commands of the U.S. armed forces, each headed by a senior four-star general or admiral, from March 2007 to March 2008. During his tenure as CENTCOM commander, he was responsible for U.S. operations in Iraq and Afghanistan and directed all U.S. military activities in the Middle East, Central Asia and the Horn of Africa.

Prior to heading CENTCOM, Admiral Fallon served with distinction as the commander of U.S. Pacific Command from February 2005 to March 2007 with responsibility for U.S. military engagement and operations in the Asia-Pacific region of the world. He had previously served as commander for U.S. Fleet Forces Command and the U.S. Atlantic Fleet from September 2003 to February 2005. He was the 31st vice chief of Naval Operations, serving as the number two officer in the Navy, from October 2000 through August 2003.

Admiral Fallon said, "I am delighted to affiliate with MIT, an institution with a peerless reputation for finding solutions to difficult problems. It will be my honor and pleasure to join the Center and I look forward to working with the distinguished faculty, staff and students at MIT."

A generous gift from Robert E. Wilhelm supports the Center's Wilhelm fellowship. The fellowship is awarded to individuals who have held senior positions in public life and is open, for example, to heads of non-profit agencies, senior officials at the State Department or other government agencies, including ambassadors, or senior officials from the U.N. or other multilateral agencies. Previous Wilhelm Fellows include Ambassador Barbara Bodine and Ambassador Frances Deng.