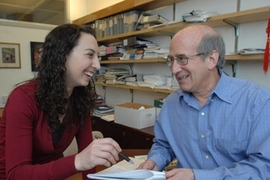 At first glance, not much. But both are complicated dynamic systems that are extremely difficult to model — until now. An MIT graduate student has developed a methodology for automatically constructing computer models that can accurately describe the behavior of such complex systems with very little background information.

The work has numerous potential applications, from enabling oil companies to get a clearer picture of where oil might be located underground to allowing port operators to spot suspicious behaviors.

Graduate student Emily Fox, of MIT's Laboratory for Information and Decision Systems, will present her new model at the Neural Information Processing Systems conference on Dec. 10.

The methodology is designed to build models for complicated systems whose behavior is characterized by abrupt changes. These complex dynamic systems include stock markets and dancing bees: Honeybees switch between several dances in seemingly random fashion, and stock markets are notoriously unpredictable.

While modeling of dynamic systems is a subject that has received considerable attention from researchers in many disciplines, most require constraining assumptions such as a single, consistent mode of dynamic behavior, and possibly prior information regarding the structure of the underlying dynamics.

"It's quite exciting that even when you remove the shackles of putting in prior information, there's a lot you can discover about a complex system," said Fox's advisor, Professor of Electrical Engineering Alan Willsky.

The new methodology sifts through sets of data, looks for patterns and comes up with equations that describe these patterns.

In the case of the honeybee, Fox told the model the position of the bee and its head angle for 30 seconds, taking data in each of 30 frames per second. From that information, the model came up with the number of different dances, the bee's dancing state at each time point, the probability that the bee will switch to a different dance at each point, and equations that describe each dance.

The methodology, which aims to come up with the simplest model that explains the data, accurately concluded that the honeybees have three dances. Biologists have long known that honeybees use the dances to communicate distance and direction of potential food sources or nest sites.

The methodology provides a tool that can potentially save time and effort for scientists who study the dancing bees, who now have to painstakingly review long videos and visually categorize the dances.

"You don't want to go through and check frame by frame," said Fox. "This is a way of automating that, and labeling the data for them."

Fox also tested the model on data from the Brazilian stock market, using the same algorithm she used for the dancing bees. Given information on the Brazilian market's daily returns over a four-year period, the model inferred the number of modes of market volatility and the probability that the market would shift to a different state of volatility.

Currently the researchers are focusing on the model's descriptive abilities, and the accuracy with which it discovers and extracts models. While the work is still in relatively early stages, it offers promise in several areas. The first is simply discovering behavior, helping scientists and other users with their studies or monitoring responsibilities.

While the primary objective of this research is discovering models that can explain complex behavior (and thus inform domain experts), the extracted models could also be used as the basis for real-time estimation, tracking and prediction.

In addition, in the context of oil exploration this methodology could be used to discover models that automatically describe "depositional environments," i.e., processes of laying down geological layers in the earth, such as those deposited in a river bed or by a sand dune moving across a desert.

Erik Sudderth and Michael I. Jordan of the University of California at Berkeley are also authors of the paper Fox will present at the NIPS conference.

The research was funded by the Army Research Office and the Air Force Office of Scientific Research.