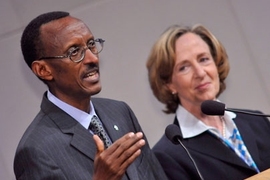 Caption:
Paul Kagame, president of the Republic of Rwanda, makes a point at the Compton Lecture as MIT President Susan Hockfield looks on.
Credits:
Photo / L. Barry Hetherington
Connections between the technology-hungry countries of Africa and the tech-savvy MIT community were underscored Thursday, Sept. 18, by the first democratically elected president of the Republic of Rwanda and the first African leader to give MIT's prestigious Compton lecture.

MIT Tech TV
On September 18, 2008, President Paul Kagame of Rwanda delivered a lecture entitled, "Imperative of Science and Technology in Accelerating African and Rwandan Development." After the lecture, President Kagame took questions from the audience pertaining to this subject.
Video: AMPS

Paul Kagame, a former guerrilla leader whose forces helped halt the Rwanda genocide of 1994, told a packed crowd in the Kresge Auditorium that for Africa to use its abundant natural resources to overcome poverty, "We must invest heavily in new levels of education and especially knowledge institutions. This is where we in Africa and Rwanda remain particularly vulnerable."

Kagame, a man described by MIT President Susan Hockfield as "one of Africa's most promising young leaders" and someone unafraid of "building a country on the basis of ideas," drew four standing ovations — two during the introductions before he even spoke a word.

Kagame, a soft-spoken man with a bespectacled, scholarly demeanor, talked slowly and deliberately about how science and technology — particularly mobile technology — was accelerating economic growth in Africa.

He described how the mobile phone was "leapfrogging" development. Africa "is the world's fastest growing mobile telephone market" and mobile phone companies will invest $50 billion in the continent in the next five years, he said.

Mobile phones have transformed ways of doing business, stimulated the economy by spinning off smaller retail enterprises and "reduced the barriers" among farmers, traders and consumers, he said.

"Africans are using mobile phones to retrieve savings, transfer funds, make payments and access student exam results." Even AIDS treatment has been affected: "The remotest areas of the country, without electricity, are linked to the (medical) system by solar-powered mobile phones," he said.

"This illustrates the almost limitless ways these technologies can be used to sidestep our development challenges."

Still, he added, "this is not enough." The continent needs to train and retain knowledge specialists — the "single most challenging task facing Africa," he said.

Kagame said Africans look to places such as Boston as models because of the productive interaction here among "knowledge centers," business and government. Boston, he noted, "transformed itself from a maritime trading port to the knowledge economy center that we see today."

Africa seeks transformation as well. The current political stability and growth of democracy in Rwanda "is in sharp contrast to a decade ago" when it was uncertain if the country was even "a viable state," he said. Now, the continent is becoming increasingly "relevant" on the world stage: "Significant foreign investment is coming in to Africa from Asia, especially China, India, as well as the Gulf states."

Kagame made a direct appeal for more links between MIT and Rwanda. "I invite you, MIT community, to be part of overcoming our challenges and turning them into opportunities," he said.

During a lengthy Q& A period, Kagame fielded questions on topics such as what other mobile technology might be helpful to Africa (he wasn't sure) and how to encourage competence leadership and "good governance" throughout the region.

Sloan MBA student Erica Carlisle asked how Rwanda would deal with its high birthrate (the country is the densest populated in Africa). Kagame said education would help to encourage families, which have an average of six children, to reduce that to half.

The Karl Taylor Compton Lecture Series was established in 1957 to honor the late Karl Taylor Compton, who served as president of MIT from 1930 to 1948 and as chairman of the MIT Corporation from 1948 to 1954. The purpose of the lecture series is to give the MIT community direct contact with the important ideas of our times and with people who have contributed much to modern thought. Recent Compton speakers include U.S. Sen. Jeff Bingaman of New Mexico and former NBC News anchor Tom Brokaw. The lectures are sponsored by the MIT president, in conjunction with the Office of the Provost.