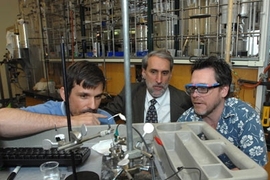 Ask any scientist to name Earth's most abundant source of energy, and the answer comes quickly: sunlight. In one hour, the sun strikes Earth with enough energy to power the entire planet for a year.

"There's nothing that compares to the sun. Everything else pales in comparison," says Daniel Nocera, the Henry Dreyfus Professor of Energy in MIT's Department of Chemistry.

With gas and oil prices at all-time highs, it's only logical for scientists to try to harness some of that solar energy. To that end, three MIT researchers are building a device that mimics photosynthesis--the process plants use to capture and store the sun's vast energy.

MIT chemists including Nocera, Peters and Christopher Cummins are part of a National Science Foundation-funded solar project, in collaboration with Caltech. The researchers are also part of MIT's recently announced Solar Revolution Project (SRP), which aims to transform solar power into an affordable, mainstream energy solution in the near future.

MIT is uniquely positioned to tackle the issues surrounding solar power, says Nocera, who will direct the SRP. It's drawing in private funding--such as a recent $10 million grant from the Chesonis Family Foundation to launch the SRP--and the work plays to MIT's strengths in the physical sciences.

The SRP will complement and interact closely with other large solar projects at MIT, creating one of the largest solar energy clusters at any research university.

Professor Ernest Moniz, director of the MIT Energy Initiative (MITEI), said, "Climate change makes the search for more environmentally benign sources of energy urgent and hugely important. Many experts have concluded that solar energy is a key, if not the key answer to our global energy challenges in the long term."

Much more chemical research will be needed to make solar energy technologically and economically viable. When plants photosynthesize, they produce high-energy sugars such as glucose; the chemists aim to produce hydrogen fuel or hydrocarbons such as methanol.

When sunlight strikes the artificial photosynthesis device, high-energy photons will split water into hydrogen and oxygen. One of the researchers' biggest challenges is developing inexpensive catalysts that can split water efficiently. Platinum does the job, but it is very rare and expensive, so the researchers are focusing on more abundant metals, such as iron, cobalt, nickel and manganese.

"There are a lot of different approaches that we're exploring. We're not putting all of our eggs in one basket," said Cummins.

Once water molecules are split into hydrogen and oxygen, the hydrogen can power fuel cells. In Nocera's dream scenario, within 10 or 15 years houses will have solar panels on the roof that yield hydrogen to power the house or recharge an electric car.

"It opens up a future where I could see a house that will be its own power station," Nocera said.

For solar energy to have a very significant impact on world energy use, it must also yield a liquid fuel that can power cars and other vehicles. To achieve that, hydrogen fuel could be further processed into hydrocarbons such as methanol.

"We want to really emulate photosynthesis, and not just split water into protons and electrons, but turn hydrogen into the chemical currency of liquid fuel," says Peters.

Carbon dioxide can be added to hydrogen to generate hydrocarbon fuels and then released as it's burned, so the entire process is carbon-neutral, notes Peters.

All of the researchers are committed to making solar power a reality, because, as they say, there is no other choice.

"We're never going to get it if we don't try. We must throw all our resources at this problem because it's so important to the survival of our habitat on this planet," says Cummins.