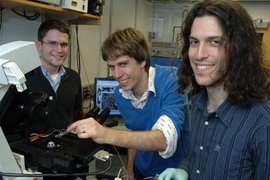 An MIT team has used an engineering approach to show that complex biological systems can be studied with simple models developed by measuring what goes into and out of the system.

Such an approach can give researchers an alternative way to look at the inner workings of a complicated biological system--such as a pathway in a cell--and allow them to study systems in their natural state.

The MIT researchers focused on a pathway in yeast that controls cells' response to a specific change in the environment. The resulting model is "the simplest model you can ever reduce these systems to," said Alexander van Oudenaarden, W.M. Keck Career Development Professor in Biomedical Engineering and Associate Professor of Physics and senior author of a paper describing the work in the Jan. 25 issue of Science.

Quantitative modeling of a biological pathway normally involves intense computer simulations to crunch all available data on the dozens of relevant reactions in the pathway, producing a detailed interaction map.

"These simulations are difficult to perform and interpret because many model parameters are not or cannot be experimentally measured. Moreover, because there are so many interconnected components in the network, it is difficult to make reliable predictions," said van Oudenaarden.

Alternatively, a complex system can be treated as a "black box," where you don't know what's happening inside but can figure it out by analyzing the system's response to periodic inputs. This approach is widely used in the engineering disciplines but has rarely been applied to analyze biological pathways. The technique is very general and could be used to study any cellular pathway with measurable inputs and outputs, van Oudenaarden said.

In the new study, the "black box" is a pathway involving at least 50 reactions. The pathway is activated when yeast cells are exposed to a change in the osmotic pressure of their environment, for example, when salt is added to their growth media.

The researchers controlled the inputs (bursts of salt) and measured output (activity of Hog1 kinase, an enzyme with a pivotal role in the yeast salt-stress response).

They exposed the cells to salt bursts of varying frequency, then compared those inputs with the resulting Hog1 activity.

Using that data and standard methods from systems engineering, they came up with two differential equations that describe the three major feedback loops in the pathway: one that takes action almost immediately and is independent of the kinase Hog1, and two feedbacks (one fast and one slow acting) that are controlled by Hog1.

The fast feedbacks prevent the yeast cell from shriveling up as water rushes out of the cell into the saltier environment. That is accomplished by increasing the cellular concentration of glycerol, a byproduct of many cell reactions. The presence of glycerol inside the cell balances the extra salt outside the cell so water is no longer under osmotic pressure to leave the cell.

In the short term, glycerol concentration is immediately increased by blocking the steady stream of glycerol that normally exits the cell. In the long-term feedback loop, Hog1 goes to the nucleus and activates a pathway that induces transcription of genes that produce enzymes that synthesize more glycerol. This process takes at least 15 minutes.

During the salt shocks, the short-term response kicks in right away, but the cells also initiate the longer-term responses.