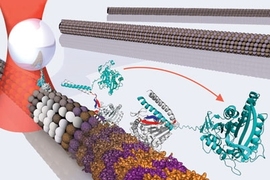 Kinesin, a motor protein that also carries neurotransmitters, "walks" along cellular beams known as microtubules. For the first time, the MIT team has shown at a molecular level how kinesin generates the force needed to step along the microtubules.

The researchers, led by Matthew Lang, associate professor of biological and mechanical engineering, report their findings in the Nov. 24 online early issue of the Proceedings of the National Academy of Sciences.

Because kinesin is involved in organizing the machinery of cell division, understanding how it works could one day be useful in developing therapies for diseases involving out-of-control cell division, such as cancer.

In the PNAS paper, Lang and his colleagues offer experimental evidence for a model they reported in January in the journal Structure. Their model suggests — and the new experiments confirm — that a small region of the protein, part of which joins the head and tail is responsible for generating the force needed to make kinesin walk. Two protein subunits, known as the N-terminal cover strand and neck linker, line up next to each other to form a sheet, forming the cover-neck bundle that drives the kinesin head forward.

"This is the kinesin power stroke," said Lang.

Next, Lang's team plans to investigate how the two kinesin heads communicate with each other to coordinate their steps.

Lead author of the PNAS paper is Ahmad Khalil, graduate student in mechanical engineering. Other MIT authors of the paper are David Appleyard, a graduate student in biological engineering; Anna Labno, a recent MIT graduate; Adrien Georges, a visiting student in Lang's lab; and Angela Belcher, the Germehausen Professor of Materials Science and Engineering and Biological Engineering. This work is a close collaboration with authors Martin Karplus of Harvard and Wonmuk Hwang of Texas A&M.

The research was funded by the National Institutes of Health and the Army Research Office Institute of Collaborative Biotechnologies.