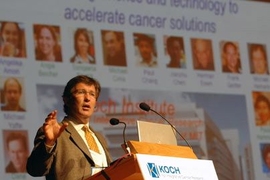 Speakers from MIT and other institutions described the promise of nanotechnology to help diagnose, treat and monitor cancer at the annual symposium hosted by the David H. Koch Institute for Integrative Cancer Research at MIT on Friday, June 27.

More than 1,100 people attended the symposium, titled "Nanotechnology and Cancer: The Power of Small Science."

Institute Professor Robert Langer, a pioneer in nanotechnology, described new techniques that researchers in his lab are using to create delivery systems for gene therapy and RNA interference. They have developed new ways to quickly synthesize a vast array of polymers that can be modified for optimal ability to deliver their payload, whether it's DNA, RNA or a drug.

"Small changes in chemistry can make huge changes in what you get," said Langer, who is also a member of the Koch Institute. "You can find very different properties and pick out polymers that do different things."

Langer and Sangeeta Bhatia, professor of electrical engineering and health sciences and technology and a member of the Koch Institute, talked about the prospect of building nanodevices that diagnose tumors, deliver drugs, and monitor the progress of treatment, all in one device.

Paula Hammond, the Bayer Professor of Chemical Engineering at MIT and Koch Institute member, described the polymers that her lab is developing to deliver cancer drugs directly to tumor cells. She uses self-assembling polymers with specific molecules attached that allow the nanoparticles to find and bind to tumor cells.

"We've been able to design these systems so they can act as very specific targeting vehicles for drug delivery," said Hammond.

Other speakers included Ralph Weissleder, director of the Center for Systems Biology at Massachusetts General Hospital, who described several types of nanoparticles his group is developing to detect cancer in its early stages. Weissleder and Langer are principal investigators of the MIT-Harvard Center of Cancer Nanotechnology Excellence.

This is the first cancer symposium held since the MIT Center for Cancer Research officially became the David H. Koch Institute for Integrative Cancer Research. The institute will be located in a new building now under construction at the corner of Main and Ames streets.

The institute will house both cancer biologists and engineers, who will work together to find new ways to detect, treat and prevent cancer.

"I'm convinced that the Koch Institute, in both the design of the building and its organization, will help define and accelerate a whole new era in cancer research," said MIT President Susan Hockfield, who opened Friday's symposium.