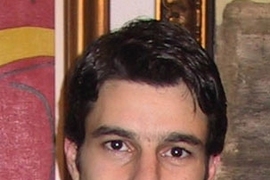 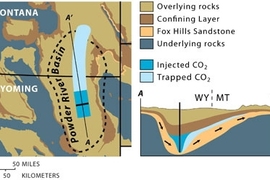 To prevent global warming, researchers and policymakers are exploring a variety of options to significantly cut the amount of carbon dioxide that reaches the atmosphere. One possible approach involves capturing greenhouse gases such as carbon dioxide at the source -- an electric power plant, for example -- and then injecting them underground.

While theoretically promising, the technique has never been tested in a full-scale industrial operation. But now MIT engineers have come up with a new software tool to determine how much CO2 can be sequestered safely in geological formations.

The work will be reported Nov. 18 at the 9th International Conference on Greenhouse Gas Control Technologies (GHGT-9), to be held Nov. 16-20 in Washington, D.C.

According to the 2007 MIT study, "The Future of Coal," and other sources, capturing CO2 at coal-burning power plants and storing it in deep geological basins will mitigate its negative effects on the atmosphere.

However, injecting too much CO2 could create or enlarge underground faults that may become conduits for CO2 to travel back up to the atmosphere, said Ruben Juanes, assistant professor of civil and environmental engineering (CEE) and one of the authors of the work. "Our model is a simple, effective way to calculate how much CO2 a basin can store safely. It is the first to look at large scales and take into account the effects of flow dynamics on the stored CO2," he said.

Already Juanes and co-author CEE graduate student Michael L. Szulczewski have applied their model to the Fox Hills Sandstone in the Powder River basin straddling Montana and Wyoming. They found that the formation would hold around 5 gigatons of CO2 -- more than half of all the CO2 emitted by the United States each year.

A geological basin is a large underground bowl between 100 and 1,000 kilometers wide and 5,000 kilometers deep that has filled over millennia with layers of sand, fine-grained clays, and other sediments that are eventually consolidated into porous rock. Some of the layers contain brine and are called deep saline aquifers. CO2 would be injected into the aquifers through wells.

The MIT model predicts how much a plume of CO2 will migrate from its injection well and the path it is likely to take due to underground slopes and groundwater flow.

"A lot of people have done studies at small scales," Szulczewski said. "If we're going to offset emissions, however, we're going to inject a lot of CO2 into the subsurface. This requires thinking at the basin scale."

"Despite the fact that our model applies at the basin scale, it is very simple. Using only pen and paper, you take geological parameters such as porosity, temperature and pressure to calculate storage capacity," Szulczewski said. "Other methods suffer from major shortcomings of accuracy, complexity or scale."

Juanes studies a phenomenon called capillary trapping, through which CO2, liquefied by the pressure of the Earth, is trapped as small blobs in the briny water (picture bubbles of oil in vinegar). The CO2 dispersed throughout the basin's structural pores eventually dissolves and reacts with reservoir rocks to precipitate out into harmless carbonate minerals.

CO2 has been sequestered in small pilot projects in Norway, Algeria and elsewhere. In 2004, 1,600 tons of CO2 were injected 1,500 meters into high-permeability brine-bearing sandstone of the Frio formation beneath the Gulf coast of Texas. Current proposals call for injecting billions of tons within the continental United States.

The GHGT-9 conference is organized by MIT in collaboration with the IEA Greenhouse Gas R&D Programme (IEA GHG), with sponsorship from the U.S. Department of Energy.

This research was supported by the McClelland Fund, administered by the MIT Energy Initiative, and by the Reed Research Fund.