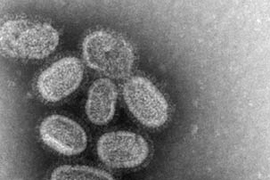 MIT researchers have explained why two mutations in the H1N1 avian flu virus allowed the disease to spread during the 1918 pandemic that killed at least 50 million people. The work could help scientists detect and contain a future bird flu outbreak among humans.

The team showed that the 1918 influenza strain developed two mutations in a surface molecule called hemagglutinin (HA). This, in turn, allowed it to bind tightly to receptors in the human upper respiratory tract.

This new work could aid researchers in monitoring the HA mutations in the H5N1 avian flu strains currently circulating in Asia. Epidemiologists fear these mutations could enable the virus to jump from birds and spread between humans--a possibility that could trigger millions more deaths than the 1918 pandemic.

Ram Sasisekharan, the Underwood Prescott Professor of Biological Engineering and Health Sciences and Technology, is the senior author of a paper on the work published in the Feb. 18 issue of the Proceedings of the National Academy of Sciences.

In January, Sasisekharan and colleagues reported in Nature Biotechnology that flu viruses can only bind to human respiratory cells if they match the shape of sugar (or glycan) receptors found on those cells.

The glycan receptors found in the human respiratory tract are known as alpha 2-6 receptors, and they come in two shapes--one resembling an open umbrella, and another resembling a cone. To infect humans, the MIT team found that avian flu viruses must gain the ability to bind to the umbrella-shaped alpha 2-6 receptor.

In the current study, the team discovered that two mutations in HA allow flu viruses to bind tightly or with high affinity to the umbrella-shaped glycan receptors.

"The affinity between the influenza virus HA and the glycan receptors appears to be a critical determinant for viral transmission," said Sasisekharan.

The researchers used the 1918 influenza virus as a model system to investigate the biochemical basis for hemagglutinin binding to glycans, which leads to viral transmission. They compared the virus that caused the 1918 pandemic (known as SC18) with a strain called NY18, which differs from SC18 by only one amino acid, and also the AV18 strain, which differs from SC18 by two amino acids.

Using ferrets (which are susceptible to human flu strains), researchers had earlier found that, while SC18 transmitted efficiently between ferrets, NY18 is only slightly infectious and AV18 not at all infectious.

These earlier findings correlate with the viruses' ability to bind to umbrella-shaped alpha 2-6 glycan receptors, demonstrated in the current PNAS study.

AV18, which does not infect humans, does not have any affinity for the umbrella-shaped alpha 2-6 receptors and binds only to alpha 2-3 receptors.

Another strain, TX18, binds to alpha 2-6 and alpha 2-3 but, because it binds with high affinity to the umbrella-shaped alpha 2-6 receptors, is much more infectious than NY18.

Researchers from the Centers for Disease Control and Prevention reported on the varying infectiousness of these strains last year, but the PNAS study is the first that explains the exact biochemical reason underlying these differences.

The research was funded by the National Institute of General Medical Sciences and the Singapore-MIT Alliance for Research and Technology (SMART).

A version of this article appeared in MIT Tech Talk on February 27, 2008 (download PDF).