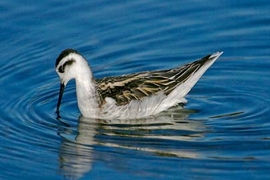 ↓ Download Image
Caption: MIT researchers have figured out how the phalarope, a shorebird with a long, narrow beak, transports its food from the tip of its beak to its mouth. Here the bird feeds by pecking at the water surface.
Credits: Photo / Rainey Schuler 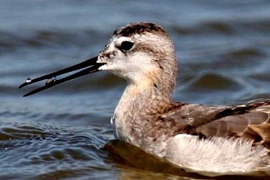 Caption:
MIT researchers have figured out how the phalarope, a shorebird with a long, narrow beak, transports its food from the tip of its beak to its mouth. Here the bird feeds by pecking at the water surface.
Credits:
Photo / Rainey Schuler

As Charles Darwin showed nearly 150 years ago, bird beaks are exquisitely adapted to the birds' feeding strategy. A team of MIT mathematicians and engineers has now explained exactly how some shorebirds use their long, thin beaks to defy gravity and transport food into their mouths.

The phalarope, commonly found in western North America, takes advantage of surface interactions between its beak and water droplets to propel bits of food from the tip of its long beak to its mouth, the research team reports in the May 16 issue of Science.

These surface interactions depend on the chemical properties of the liquid involved, so phalaropes and about 20 other birds species that use this mechanism are extremely sensitive to anything that contaminates the water surface, especially detergents or oil.

"Some species rely exclusively on this feeding mechanism, and so are extremely vulnerable to oil spills," said John Bush, MIT associate professor of applied mathematics and senior author of the paper.

Wildlife biologists have long noted the unusual feeding behavior of phalaropes, which spin in circles on the water, creating a vortex that sweeps small crustaceans up to the surface, just like tea leaves in a swirling tea cup.

The birds peck at the surface, picking up millimetric droplets of water with their prey trapped inside. Since the birds point their beaks downward during the feeding process, gravity must be overcome to get those droplets from the tip of the bird's long beak to its mouth. Until now, scientists have been puzzled as to how that happens.

Scientists speculated that the feeding strategy depended on the drop's surface tension. Surface tension normally dominates fluid systems that are small relative to raindrops (for example, the world of insects), but it was not clear how it could benefit shorebirds. A key observation was that in order to propel the drop, the birds open and close their beaks in a tweezering motion.

To unravel the mystery, Bush teamed up with Manu Prakash, a graduate student in MIT's Center for Bits and Atoms, and David Quere, of the Ecole Polytechnique in Paris, a visiting professor in MIT's math department at the time of the study. They built a mechanical model of the phalarope beak that allowed them to study the process in slow motion.

"This may be the first known example where droplet motion is enabled rather than resisted by contact angle hysteresis," Bush said.

In this stepwise ratcheting fashion, the drop travels along the beak at a speed of about 1 meter per second.

The efficiency of the process, which the authors dub the "capillary ratchet," depends on the beak shape: Long, narrow beaks are best suited to this mode of feeding. The study highlights the sensitivity of this mechanism to the opening and closing angles of the beak: "Varying these angles by a few degrees can change the drop speed by a factor of 10," Quere said.

The capillary ratchet also depends critically on the beak's wettability--a measure of a liquid's tendency to bead up into droplets or spread out to wet its surface. Oil is much more "wetting" than water, so if the beak is soaked in oil from a spill, this process won't work.

The researchers note a potential application of nature's design: "We are currently exploring microfluidic devices in which this mechanism could be exploited for directed droplet transport, allowing for controlled stepwise motion of microliter droplets," Prakash said.

The research was funded by the National Science Foundation, the Centre National de la Recherche Scientifique (France) and MIT's Center for Bits and Atoms.