Wave of the future: MIT to graduate first class of biological engineering majors 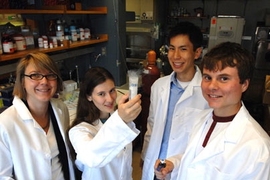 "I kind of lucked into it," said MacDonald, who originally planned to study biology. "It turned out to be even more interesting than I thought it would be."

Trying out a brand new major might have scared off some students, but MacDonald and her classmates welcomed the chance to be part of something new and help shape the direction of the program.

"That's one of the great things about having a new major," said senior Michael Yee. "The curriculum's fluid. It's not set in stone, so you can have a voice in what you're learning."

MIT has had a Ph.D. program in biological engineering (BE) for 10 years, but the undergraduate degree program was approved just three years ago, making it the first new major course of study at MIT in 39 years.

Faculty and student interest in an engineering program underpinned by biology has been growing for many years, said Linda Griffith, chair of the BE Undergraduate Programs Committee, who spearheaded the efforts to develop the undergraduate major.

The undergraduate BE minor, established in 1995, quickly became the most popular minor at the Institute, and students clamored for it to become a major.

Unlike biomedical engineering programs at other schools, which focus on applying engineering to medicine, MIT's BE program applies engineering analysis and design to the molecular and cellular building blocks of life in all its diverse forms, to create blueprints for how to build new things from biology. The program fuses molecular biology with engineering to create a new discipline that has applications in not just medicine but also electronics, ocean ecology and other fields.

"We can really start thinking about biology in an engineering sense," said Griffith. "We know a lot about cells and molecules, but how do they work together as machines?"

"You get a taste of a lot of different disciplines and really get to see the connections between them," said Yee.

In its first year, the new major drew so much interest that Griffith planned to hold a lottery to keep the class size to 24. Thirty-three students ended up applying, and with some addition of teaching resources, the BE faculty were able to accept all of those students.

Since then, with the addition of more lab space and rearranging of course schedules, the major has roughly doubled in size, to about 50 students each in this year's junior and sophomore classes.

This year's graduating seniors say that the small size of the BE program built camaraderie among the students and allowed them to have a great deal of interaction with faculty.

"It was really fun having these classes with such a small group and really getting to know everyone," said Justin Lo, a senior graduating in BE.

About a third of this year's 23 graduates are going to graduate school, including Lo, who plans to pursue an MD/PhD at the Harvard-MIT Division of Health Sciences and Technology, Yee, who will study biomedical engineering at the University of Michigan, and MacDonald, who is headed to the University of Pennsylvania to earn a PhD in bioengineering.

Other graduates will be going to medical school, while some have accepted jobs at biotechnology companies or consulting firms.

Griffith credits the seniors with helping to make the new program a success.

"They knew going into this that it was an experiment," she said. "They really rose to the occasion, went with the flow and helped us make the program better."