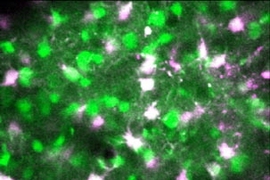 In work that solves a long-standing mystery in neuroscience, researchers at MIT's Picower Institute for Learning and Memory have shown for the first time that star-shaped brain cells called astrocytes--previously considered bit players by most neuroscientists--make noninvasive brain scans possible.

Imaging techniques such as functional magnetic resonance imaging (fMRI) and positron emission tomography (PET) have transformed neuroscience, providing colorful maps of brain activity in living subjects. The scans' reds, oranges, yellows and blues represent changes in blood flow and volume triggered by neural activity. But until the MIT study, reported in the June 20 issue of Science, no one knew exactly why this worked.

"Why blood flow is linked to neuronal activity has been a mystery," said study co-author Mriganka Sur, Sherman Fairchild Professor of Neuroscience and head of the Department of Brain and Cognitive Sciences at MIT. "Previously, people have argued that the fMRI signal reports local field potentials or waves of incoming electrical activity, but neurons do not connect directly to blood vessels. A causal link between neuronal activity and blood flow has never been shown."

Of the two major cell types in the brain, glia outnumber neurons nine to one. Astrocytes--the most common type of glia--extend their branching tendrils both around synapses--through which neruons communicate--and along blood vessels.

Using a cutting-edge technique, Sur and colleagues found that astrocytes receive signals directly from neurons and provide their own neuron-like responses to directly regulate blood flow. They are the missing link between neurons and blood vessels, he said. When astrocytes are shut down, fMRI doesn't work.

"Astrocytes are implicated in many brain disorders and express a very large number of genes that are in the brain," Sur said. "Their role is crucial for understanding brain dysfunction as well as for developing potential therapeutics."

The MIT study shows that, contrary to prevailing belief, astrocytes influence complex neuronal computations such as the duration and selectivity of brain cell responses to stimuli. But their chemical signals had rendered them invisible to traditional brain research methods that monitor electrical activity.

"Electrically, astrocytes are pretty silent," said study co-author James Schummers, Picower Institute postdoctoral associate. "A lot of what we know about neurons is from sticking electrodes in them. We couldn't record from astrocytes, so we ignored them."

When astrocytes were imaged with two-photon microscopy, "the first thing we noticed was that the astrocytes were responding to visual stimuli. That took us completely by surprise," Schummers said. "We didn't expect them to do anything at all. Yet there they were, blinking just like neurons were blinking. We didn't know if the rest of the world would think we were crazy."

"This work shows that astrocytes--which make up 50 percent of the cells in the cortex but whose function was unknown--respond exquisitely to sensory drive, regulate local blood flow in the cortex and even influence neuronal responses," Sur said. "What's more, astrocytes are arranged in orderly feature maps, exquisitely mapped across the cortical surface in sync with neuronal maps."

The next step, Schummers said, is to explore exactly how astrocytes work on neurons.

In addition to Sur and Schummers, postdoctoral associate Hongbo Yu is a lead author of the study.

This work is supported by the National Institutes of Health and the Simons Foundation.