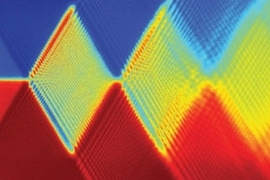 ↓ Download Image
Caption: The colorful patterns formed by the response of superconducting 'artificial atoms' to a new probe called amplitude spectroscopy serve as an identifying fingerprint for a given atom.
Credits: Image / MIT Lincoln Laboratory

Caption:
The colorful patterns formed by the response of superconducting 'artificial atoms' to a new probe called amplitude spectroscopy serve as an identifying fingerprint for a given atom.
Credits:
Image / MIT Lincoln Laboratory

MIT researchers may have found a way to overcome a key barrier to the advent of super-fast quantum computers, which could be powerful tools for applications such as code breaking.

Ever since Nobel Prize-winning physicist Richard Feynman first proposed the theory of quantum computing more than two decades ago, researchers have been working to build such a device.

One approach involves superconducting devices that, when cooled to temperatures of nearly absolute zero (-459 degrees F, -273 degrees C), can be made to behave like artificial atoms -- nanometer-scale "boxes" in which the electrons are forced to exist at specific, discrete energy levels (picture an elevator that can stop at the floors of a building but not in between). But traditional scientific techniques for characterizing -- and therefore better understanding --Â atoms and molecules do not necessarily translate easily to artificial atoms, said William Oliver of MIT Lincoln Laboratory's Analog Device Technology Group and MIT's Research Laboratory for Electronics (RLE).

In the Sept. 4 issue of Nature, Oliver and colleagues have reported a technique that could fill that gap. Oliver's co-authors are lead author David Berns, a graduate student in physics and RLE; Mark Rudner, also a graduate student in physics; Sergio Valenzuela, a research affiliate at MIT's Francis Bitter Magnet Laboratory; Karl Berggren, the Emanuel E. Landsman Career Development Associate Professor in the Department of Electrical Engineering and Computer Science (EECS); Professor Leonid Levitov of physics; and EECS Professor Terry Orlando. The work is a hallmark of the increased collaboration between researchers on the MIT campus and at Lincoln Laboratory.

Characterizing energy levels is fundamental to the understanding and engineering of any atomic-scale device. Ever since Isaac Newton showed that sunlight could be dispersed into a continuous color spectrum, each color representing a different energy, this has been done through analysis of how an atom responds to different frequencies of light and other electromagnetic radiation -- a technique known generally as spectroscopy.

But artificial atoms have energy levels that correspond to a very wide swath of frequencies, ranging from tens to hundreds of gigahertz. That makes standard spectroscopy costly and difficult to apply. "The application of frequency spectroscopy over a broad band is not universally straightforward," Oliver said.

Better knowledge of these superconducting structures could hasten the development of a quantum computer. Each artificial atom could function as a "qubit," or quantum bit, which can be in multiple energy states at once. That means it would not be simply a one or a zero (like the electronic switches in a conventional computer) but rather in a sort of hazy combination of both states (it's akin to the famous paradox of Schroedinger's quantum cat, which is considered to be both alive and dead at the same time until an observation is made, simultaneously creating and revealing its true condition). This odd behavior, inherent to the quantum nature of materials at the atomic level, is what gives quantum computing such promise as a paradigm-busting advance.

Amplitude spectroscopy gleans information about a superconducting artificial atom by probing its response to a single, fixed frequency that is strategically chosen to be, as Oliver puts it, "benign." This probe pushes the atom through its energy-state transitions. In fact, the atoms can be made to jump between energy bands at practically unlimited rates by adjusting the amplitude of the fixed-frequency source.

The radiation emitted by the artificial atom in response to this probe exhibits interference patterns. These patterns, which Oliver calls "spectroscopy diamonds" because of their striking geometric regularity, serve as fingerprints of the artificial atom's energy spectrum.

This work was funded by the Air Force Office of Scientific Research, the Laboratory for Physical Sciences, the Department of Defense, and the US government.