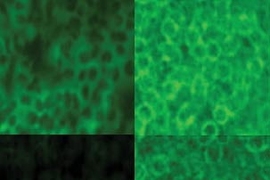 MIT and New York University researchers have identified a weakness in the defenses of the anthrax bacterium that could be exploited to produce new antibiotics.

The researchers found that nitric oxide (NO) is a critical part of Bacillus anthracis's defense against the immune response launched by cells infected with the bacterium. Anthrax bacteria that cannot produce NO succumb to the immune system's attack.

Stephen Lippard, the Arthur Amos Noyes Professor of Chemistry at MIT and an author of a paper on the work, said antibiotics developed to capitalize on this vulnerability could be effective against other bacteria that employ the same defense system. Those bacteria include Staphylococcus aureus, which commonly causes infections in hospitals and can be extremely drug-resistant.

The paper appeared in the Jan. 21 online edition of the Proceedings of the National Academy of Sciences

Anthrax occurs naturally around the world and can infect all warm-blooded animals including humans. Treatment usually includes large doses of intravenous and oral antibiotics, but the disease can often be fatal--especially if treatment is not started right away.

In the human immune system, specialized cells called macrophages are the first line of defense against anthrax infection. Macrophages engulf the bacteria and bombard them with reactive oxygen and nitrogen species, which create chemical reactions toxic to the bacteria.

When the gene for the enzyme that synthesizes NO is knocked out in the bacteria, they cannot defend against early attack by the macrophages, which can then survive the infection.

"With the aid of an intracellular probe developed in our laboratory, which fluoresces in the presence of NO, our collaborators Evgeny Nudler and his group discovered a completely new target for the next generation of antibiotics," said Lippard.

With this knowledge in hand, the researchers are now using the fluorescent probe to screen libraries of chemicals for compounds that could potentially interfere with the bacterium's ability to synthesize NO, said Lippard. Such compounds could eventually be developed into new antibiotics.

Lead author of the paper is Konstantin Shatalin of the New York University School of Medicine. The research was funded by the National Institutes of Health and the National Science Foundation.