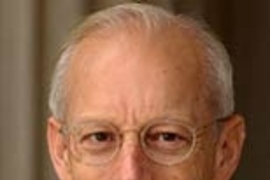 One of the great theoretical challenges facing physicists is understanding how the tiniest elementary particles give rise to most of the mass in the visible universe.

John Negele, the W.A. Coolidge Professor of Physics at MIT, will talk about the theory that governs interactions of quarks and gluons, known as quantum chromodynamics (QCD), during a Feb. 17 presentation to the American Association for the Advancement of Science annual meeting in Boston.

Negele will describe how scientists are using supercomputers and a concept called lattice field theory to figure out the behavior of quarks and gluons, the smallest known particles.

"The quest to understand the fundamental building blocks of nature has led to the exploration of successive layers of worlds within worlds," says Negele, who also holds an appointment in MIT's Laboratory for Nuclear Science.

Molecules are built from atoms, atoms from electrons and nuclei, and nuclei from protons and neutrons. Those interactions are well understood. The next step in the process is to unravel the interactions of quarks and gluons, which are strikingly different from those of larger particles and require a different approach to study them.

Several factors make interactions between quarks and gluons more complicated to study. For one, quarks are confined within larger particles, so they cannot be separated and studied in isolation. Also, the force between two quarks becomes larger as they move farther apart, whereas the force between a nucleus and an electron, or two nucleons in a nucleus, grows weaker as their separation increases.

These differences can be explained by the property of asymptotic freedom, for which David Gross, David Politzer and MIT's Frank Wilczek, the Herman Feshbach (1942) Professor of Physics, shared the 2004 Nobel Prize. This property describes how the force generated by the exchange of gluons becomes weaker as the quarks come closer together and grows larger as the quarks are separated. As a consequence, none of the analytical techniques used to successfully solve atomic and nuclear physics problems can be used to analyze quarks and gluons.

Instead, physicists use lattice field theory to study QCD interactions. Using large supercomputers, researchers can analyze QCD by representing space-time by a four-dimensional lattice of discrete points, like a crystal.

The calculations are being performed by computers specially built for this purpose, such as the 360-teraflop BlueGene/L at Lawrence Livermore National Laboratory.

In his talk, Negele will describe the basic ideas of how QCD is solved using a space-time lattice and will show selected results of the calculations of fundamental properties of protons, neutrons and other strongly interacting particles.