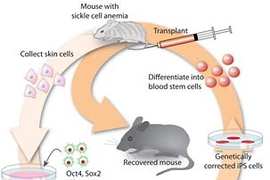 ↓ Download Image
Caption: The cycle by which MIT/Whitehead scientists successfully treated mice with a human sickle-cell anemia disease trait, using a process that begins by directly reprogramming the mice's own cells to an embryonic-stem-cell-like state.
Credits: Illustration / Tom DiCesare

Caption:
The cycle by which MIT/Whitehead scientists successfully treated mice with a human sickle-cell anemia disease trait, using a process that begins by directly reprogramming the mice's own cells to an embryonic-stem-cell-like state.
Credits:
Illustration / Tom DiCesare

MIT researchers have successfully treated mice with sickle-cell anemia in a process that begins by directly reprogramming the mice's own cells to an embryonic-stem-cell-like state, without the use of eggs.

This is the first proof-of-principle of therapeutic application in mice of directly reprogrammed induced pluripotent stem (IPS) cells, which recently have been derived in mice as well as humans.

"This demonstrates that IPS cells have the same potential for therapy as embryonic stem cells, without the ethical and practical issues raised in creating embryonic stem cells," said MIT biology professor Rudolf Jaenisch, a member of the Whitehead Institute for Biomedical Research.

The research, reported Dec. 6 in Science online, was carried out in Jaenisch's laboratory. The IPS cells were derived using modifications of the approach originally discovered in 2006 by the Shinya Yamanaka laboratory at Kyoto University.

A disease of the blood marrow caused by a defect in a single gene, sickle-cell anemia is the most common inherited blood disorder in the United States, affecting more than 70,000 Americans and one in 500 African-Americans, according to the National Institutes of Health.

The scientists in Jaenisch's lab studied a therapeutic application of IPS cells with the sickle-cell anemia model mouse developed by the laboratory of Tim Townes of the University of Alabama at Birmingham. The mouse model had been designed to include relevant human genes involved in blood production, including the defective version of that gene.

To create the IPS cells, the scientists started with cells from the skin of the diseased mice, explained lead author Jacob Hanna, a postdoctoral researcher in the Jaenisch lab. These cells were modified by a standard lab technique employing retroviruses customized to insert genes into the cell's DNA. The inserted genes were Oct4, Sox2, Lif4 and c-Myc, known to act together as master regulators to keep cells in an embryonic-stem-cell-like state. IPS cells were selected based on their morphology and then verified to express gene markers specific to embryonic stem cells. To decrease or eliminate possible cancer in the treated mice, the c-Myc gene was removed by genetic manipulation from the IPS cells.

Next, the researchers followed a well-established protocol for differentiating embryonic stem cells into precursors of bone marrow adult stem cells, which can be transplanted into mice to generate normal blood cells. The scientists created such precursor cells from the IPS cells, replaced the defective blood-production gene in the precursor cells with a normal gene and injected the resulting cells back into the diseased mice.

The blood of treated mice was tested with standard analyses employed for human patients. The analyses showed that the disease was corrected, with measurements of blood and kidney functions similar to those of normal mice.

While IPS cells offer tremendous promise for regenerative medicine, scientists caution that major challenges must be overcome before medical applications can be considered. First among these is to find a better delivery system, since retroviruses bring other changes to the genome that are far too random to let loose in humans. "We need a delivery system that doesn't integrate itself into the genome," said Hanna. "Retroviruses can disrupt genes that should not be disrupted or activate genes that should not be activated."

Potential alternatives include other forms of viruses, synthesized versions of the proteins created by the four master regulator genes that are modified to enter the cell nucleus, and small molecules, Hanna says.

This work was funded in part the National Institutes of Health.