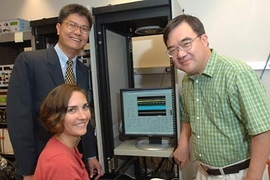 Caption:
Chi-Sang Poon (left), principal research scientist in the Harvard-MIT Division of Health Sciences and Technology, stands next to Shawna MacDonald of mechanical engineering and Gang Song, an HST research scientist. The group has found that the body's innate ability to adapt to recurring stimuli may help in designing better artificial respirators.
Credits:
Photo / Donna Coveney

MIT researchers have found that the body's innate ability to adapt to recurring stimuli could be leveraged to design more effective and less costly artificial respirators. The new approach could minimize the need for the induced sedation or paralysis currently necessary for some patients on mechanical ventilation.

Nonassociative learning, or our innate ability to adapt to recurring stimuli, is the focus of work to be described in the September 12 issue of PLoS ONE, the online, open-access journal from the Public Library of Science.

Specifically, Chi-Sang Poon, a research scientist at the Harvard-MIT Division of Health Sciences and Technology (HST), and colleagues examined rats under mechanical ventilation to see how they applied different forms of nonassociative learning to adapt to the rhythm imposed by the respirator.

Existing respirators do not consider the adaptive nature of breathing in their design. Some ignore the patient's natural rhythm and pump air in and out of the lungs on set intervals. As a result, doctors often must sedate or paralyze patients to prevent them from fighting an unfamiliar rhythm. Other respirator designs rely entirely on the patient to trigger the airflow. These systems, however, are costly and tend to be unreliable for weak patients such as newborns or those in critical care.

The MIT research suggests, however, that if a doctor takes the patient's natural breathing rhythm into account and sets the ventilator's rhythm in that same range, the patient will adapt and synchronize with the ventilator. This new approach could minimize the need for induced sedation or paralysis.

"We have intrinsic nonassociative learning capabilities, called habituation and desensitization, that [can] make up for changes in the spontaneous rhythm due to artificial lung inflation," says Poon.

In tests of rats under artificial respiration, Poon found that, if using a suitable rhythm, rats adapted to the mechanical ventilation. He also found that this learning capability enabled mice to adapt to an artificial rhythm even when the mechanical respirators applied constant air pressure. The rats effectively "tuned out" this extra pressure, filtering it out as background noise. When Poon disabled the neural pathways involved in nonassociative learning, the rats' ability to adapt was either eliminated or compromised.

Though nonassociative learning is familiar and commonly applied to smelling roses and adjusting to sunlight after emerging from a dark movie theater, it is not usually applied in a clinical environment. Because of their focus on stabilizing patients, clinicians often discount the power of learning. "Many ventilators are designed as if the patient were never in the equation," says Poon. "But it turns out, our vital functions can learn to adapt in order to survive."

Poon's coauthors of the PLoS ONE paper are Shawna M. MacDonald of MIT's Department of Mechanical Engineering and Gang Song, an HST research scientist.

A version of this article appeared in MIT Tech Talk on September 19, 2007 (download PDF).