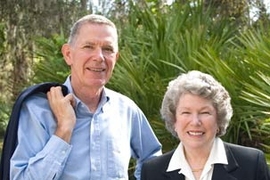 CAMBRIDGE, Mass.--The McGovern Institute for Brain Research at MIT has received a $20 million philanthropic commitment to support research into mental illness. The gift, from MIT alumnus James Poitras and his wife, Patricia, of Narcoossee, Fla., will be used to establish the James W. and Patricia T. Poitras Center for Affective Disorders Research.

The Poitras Center will support translational and clinical research on bipolar disorder, depression, schizophrenia and other major psychiatric diseases, including collaborative projects with the Broad Institute and with local clinical research institutions. It is expected that the first projects will be selected for funding within the next few months.

"We are extremely grateful to Jim and Pat Poitras for their support," said Robert Desimone, director of the McGovern Institute, who will head the new center. "Mental illnesses can have a devastating impact on both patients and their families, but with recent advances in neuroscience the field is now poised to make real progress."

"Psychiatric diseases are among the greatest clinical challenges of our time," said Susan Hockfield, president of MIT. "Through their generous gift, Jim and Pat have dramatically amplified the ability of MIT's neuroscientists to advance our understanding of these diseases."

"We are indebted to Jim and Pat for their generosity and are pleased that the Poitras Center will be part of the McGovern Institute," said Patrick and Lore McGovern, the cofounders of the Institute. "Our mission is to advance human welfare through brain research, and we are deeply gratified that others share this vision for a better future."

James Poitras retired in 2006 as president and CEO of Highland Laboratories, Inc., a family-owned medical products company based in Ashland, Mass., and continues to manage other family investments. Patricia Poitras is president of the Poitras Charitable Foundation, and both are members of the McGovern Institute leadership board. They are longstanding donors to MIT and have previously endowed a professorship in the Department of Brain and Cognitive Sciences in the field of psychiatric research.

"We decided many years ago, when bipolar disorder first affected our family directly, that our philanthropic efforts would be directed towards this area of brain research," they said. "We could not have imagined then that this perfect synergy between research at MIT's McGovern Institute and our own philanthropic goals would develop. We are very hopeful for the future."

Affective disorders, including bipolar disorder (also known as manic depression) and unipolar depression, represent the most common class of psychiatric disease. In the United States alone, the National Institute of Mental Health estimates that depression affects 9.5 percent of the population, almost 21 million people, in any given year. Yet despite their prevalence and societal cost, the underlying causes of bipolar disorder and other mental illnesses remain poorly understood.

Although these diseases tend to run in families, environmental factors such as stressful life experiences are also important in triggering illness. Understanding how heredity and experience interact within the brain to produce the clinical manifestations of disease is a major challenge, given that the genes involved are largely unknown, and no physical abnormalities have yet been found within the brain that can be used to diagnose these diseases. Although they can be treated, they cannot be cured; the available drugs are only partially effective, and ignorance of underlying biological mechanisms is a serious obstacle to the development of new therapies.

The Poitras gift is the second major philanthropic commitment to psychiatric research at MIT within the past year. In March, the Broad Institute of MIT and Harvard established the Stanley Center for Psychiatric Research with a $100 million commitment from the Stanley Foundation. The two centers will coordinate closely, according to Desimone. "By combining MIT's strengths in neuroscience with the Broad Institute's expertise in genetics and chemical biology, we can now launch a multi-pronged attack on the underlying causes of mental illness. Only through a large multidisciplinary effort can we hope to understand the causes of these very complex diseases."