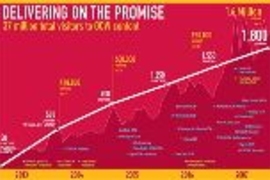 At an event hosted by President Hockfield this afternoon, the MIT community will celebrate a major milestone for the Institute's open publication of course content, OpenCourseWare (OCW). The event marks the publication of core teaching materials--including syllabi, lecture notes, assignments and exams--from virtually all MIT courses, 1,800 in total. The site includes voluntary contributions from 90 percent of faculty and more than 2,600 members of the MIT community.

"OCW demonstrates MIT's commitment to openness and to improving education on a global level," President Susan Hockfield said of the achievement. "The site embodies the generosity and dedication of our faculty."

New York Times columnist Thomas Friedman will give the keynote address at the event, which will include a panel on the future of OCW and education with MIT President Emeritus Charles Vest, former Xerox chief scientist John Seely Brown and the chair of India's National Knowledge Commission, Dr. Sam Pitroda. Hockfield will also announce a new OpenCourseWare initiative for secondary education at the event.

First announced in 2001, OpenCourseWare has grown from a 50-course pilot to a site that includes virtually the entire MIT undergraduate and graduate curriculum. Materials are published under an open license that encourages reuse, redistribution and modification for noncommercial purposes.

Associate Dean of Engineering Dick Yue chaired the committee that first proposed OCW. "The idea is simple," he said in a recent interview: "just to publish our teaching material, our course content online and make it widely available to everyone who can use it, for free."

An estimated 35 million individuals have accessed OCW materials since its launch, 60 percent of them from outside the United States. Nearly 600 courses have been translated into languages including Chinese, Spanish, Portuguese and Thai. MIT has also provided more than 120 local copies of the site to universities in bandwidth-constrained regions such as sub-Saharan Africa.

OpenCourseWare was proposed by a committee studying lifelong learning in the summer of 2000, and support for the program has been provided by the William and Flora Hewlett Foundation, the Andrew W. Mellon Foundation and the Ab Initio Corporation. The site has also been supported by more than 300 site users and alumni, including Jon Gruber, Larry Birenbaum and Abhay Parekh.

Yue said the committee had hoped the project would have broad impact, but that the use of the OCW site and the spread of the movement have far exceeded initial expectations.

"The dream was that OpenCourseWare would be a broad-based movement that would impact knowledge, information and education worldwide," Yue said. "I think it's coming to fruition even as we speak."

A version of this article appeared in MIT Tech Talk on November 28, 2007 (download PDF).