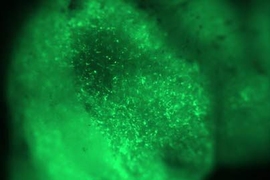 Caption:
Green fluorescent mesenchymal stem cells in a primary tumor. These cells may be responsible for metastasis in a significant subset of breast cancer patients.
Credits:
Image / Antoine Karnoub

Everyone knows that tumors are packed with cancer cells, but many normal cells live among these deviants. The normal cells form a structural framework called the stroma, which was once thought to resemble passive scaffolding. But a growing body of research suggests that cancer cells actively recruit normal cells from local and distant sites to the scaffolding, where they release signals that help the tumor thrive.

Beginning in 1999, several labs increased primary tumor growth by mixing fibroblasts (cells that contribute to the formation of connective tissue and the stroma of tumors) with cancer cells. This was the first proof that stromal fibroblasts actively foster the growth of cancer cells. Stated differently, cancer cells can co-opt normal cells to serve their own insidious purposes.

"This study provides the first direct evidence that a cancer cell's metastatic powers are not necessarily intrinsic to the cell itself," says Whitehead Institute member Robert Weinberg. "Rather, they might be influenced by the signals the cancer cell experiences from stromal cells in the context of the primary tumor."

Working with a different type of normal stromal cell, Weinberg's lab has now managed to facilitate metastasis--the spread of cancer cells from the primary tumor to distant sites. Postdoctoral researcher Antoine Karnoub has compelling evidence that some breast cancer cells recruit normal adult stem cells from bone marrow and force them to secrete a protein that fosters cancer cell movement and invasion. His results appeared online in Nature on Oct. 4.

"This study provides the first direct evidence that a cancer cell's metastatic powers are not necessarily intrinsic to the cell itself," says Weinberg, who is also an MIT professor of biology. "Rather, they might be influenced by the signals the cancer cell experiences from stromal cells in the context of the primary tumor."

The conscripts that confer these metastatic powers are mesenchymal stem cells (MSCs), which ordinarily generate bone, muscle, cartilage and fat. MSCs also play a critical role in healing wounds. Skin your knee, for example, and your body sends an emergency signal that prompts MSCs to leave their home in the bone marrow and travel to the site of the trauma. Here they help to reduce inflammation, form scar tissue and seal the wound.

"Sites of tumor formation are much like open wounds," Karnoub explains. "MSCs might very well home to those sites to aid with the healing process. Once there, they may get entangled with the tumor cells and actually help them grow."

To investigate this idea, he combined MSCs from a human hip with human breast cancer cells, implanted the mixture into the backs of mice and studied the growth of the resulting "mixed" tumors. As a control, he implanted cancer cells without MSCs into mice. To Karnoub's disappointment, both group's tumors grew to the same size and at the same speed.

Probing further, he found that while the first group's tumors metastasized, the second group's, for the most part, did not. Karnoub repeated this experiment with several other lines of human breast cancer cells and found others that demonstrated similar properties.

How did these lines of cancer cells acquire the dangerous ability to invade distant tissues?

Karnoub next examined the proteins made by the cells. He discovered that MSCs ramp up their production of a key protein called CCL5 in the presence of cancer cells, churning out about 60 times the normal amount. CCL5 is known to affect cell movement, and its levels are elevated in the blood of patients with advanced breast cancer. Could the cancer cells be "educating" the MSCs, instructing them to make CCL5, thereby promoting metastasis?

Karnoub tested this hypothesis by coaxing weakly metastatic breast cancer cells to produce lots of CCL5 in the absence of MSCs. These cells acquired the ability to move and migrate to distant tissues, confirming CCL5's key role in MSC moderated metastasis.

"MSC recruitment and CCL5 production could be responsible for metastasis in a significant subset of breast cancer patients, which has implications for diagnosing and treating the disease," Karnoub asserts. "This protein sheds light on how breast cancers mine the body's own resources to progress."

It also offers a promising therapeutic target. Karnoub was able to halt metastatic spread in the mice with mixed tumors by simply blocking CCL5 signaling.