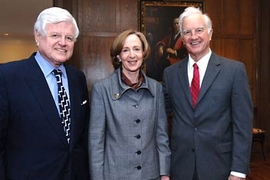 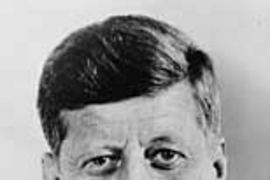 MIT and Harvard announced today that they plan to expand the Kennedy Scholarship program, which brings scholars from the United Kingdom to the two institutions.

The announcement was made during celebrations of the 40th anniversary of the program, which was established in the United Kingdom to honor the memory of President John F. Kennedy and provides funding for British graduate students to study at Harvard and MIT.

To strengthen the program, MIT and Harvard have committed to raise new endowment funds for up to two additional Kennedy fellowships at each university.

"It is an honor to be able to play a role in preserving the strength of the Kennedy Trust Scholarship Program, and I am confident that these actions are a significant step toward ensuring the Trust's continued vitality," said Harvard President Derek Bok, who participated in today's celebrations.

MIT President Susan Hockfield noted, "The Kennedy Scholarships offer exceptional students unique opportunities to broaden their intellectual and personal horizons, in ways that are more important than ever in an era defined by global interaction."

All Kennedy Scholars, including those to be supported by the new funds, are chosen in a highly competitive selection process, and admitted to Harvard or MIT. The selection process in the United Kingdom is undertaken by the Kennedy Memorial Trust, which is chaired by British economic historian Emma Rothschild, herself a former Kennedy Scholar at MIT.

"This will ensure that some of the very best British graduate students will continue to come to Boston and, like their predecessors, contribute to the intellectual life of MIT and Harvard and to the further strengthening of transatlantic ties in their future careers," said Richard Lester, MIT trustee of the Kennedy Memorial Trust. Harvard's representative on the board is Roderick MacFarquhar.

Since September 1966, when the first Kennedy Scholars enrolled at Harvard and MIT, 432 students have been awarded Kennedy Scholarships. Many have gone on to distinguish themselves in academia, public service, politics, business and the media. Prominent former Kennedy Scholars include David Miliband, the U.K. environment minister, High Court Judge Dame Mary Arden, and Mervyn King, governor of the Bank of England.

The Kennedy Scholarship program is Britain's living national memorial to President Kennedy. At the time of its creation Sen. Edward Kennedy called it the most ambitious of all the memorials to his brother. A meadowland memorial was also established at Runnymede, on the banks of the Thames where King John sealed the Magna Carta in 1215.

The senator, who participated in the 40th anniversary celebrations and delivered the Karl Taylor Compton Lecture at MIT today, remains a passionate supporter of the Kennedy Scholarships and hosts the scholars each year in Boston and Washington.

The Kennedy Memorial Trust will continue to fund the existing scholarships, in addition to the new fellowships to be funded by Harvard and MIT.

"On behalf of the trust and the scholars, I express the warmest gratitude to President Bok, President Hockfield, and to Senator and Mrs. Kennedy," said Rothschild.

For more information on the Kennedy Scholarships, visit the Kennedy Trust web site at www.kennedytrust.org.uk.